It Was a "Very" Interesting Week 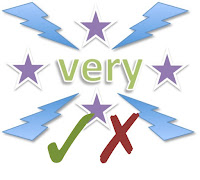 I did indeed do my experiment to eliminate the word "very" from my writing and speech for a week.  It was actually ten days, for reasons that are opaque even to me.  Anyway, here's what I discovered (at least for what is pertinent my own word usage.)

"Very" in speech isn't easy to remove.  Substituting other words often results in conversation that doesn't seem natural to the ear.  Reconstructing sentences to avoid the need for the word seems to make for stilted speech.  While the exercise has expanded my thinking, I've chosen to change my word usage in speech by only a small amount.  This holds for most of my written dialogue as well, which isn't a surprise.  It is easier to spend the time to construct good sentences without "very" in them during writing as opposed to "on the fly" during speaking - so it is in fact easier while writing to reduce the use of the word and still create believable dialog.  But not using it in a situation where someone would "obviously" use the word again makes for conversation that just comes out wrong.

But as for writing, I found many places where I was using "very" in a lazy fashion.  This applies to all kinds of writing - my blog, essays, papers, fiction, whatever.  A little extra effort in any place where I was about to use the word "very" usually resulted in a more interesting and more exact sentence.  This might mean using a different word, or better, restructuring to eliminate the need for the word completely.  That is, saying what you mean more directly, rather than using qualifiers to make the point (i.e. "exhausted" rather than "very tired").  This is not news, since writing coaches and "how to's" have been giving this sort of advice for years.  Still, it is nice as both the scientist and experimentalist that I am that I have the chance to prove it for my own personal condition.

Oh yeah, I forgot to add - this was a real pain for ten days.  We speak and write so freely.  Watching every word, and then going back over and correcting for the stray "verys" that got in there?  Serious pain.

Image Credit:  Once again, it is me and my awesome PowerPoint skillz.

Yeah ... conventions are hard to eliminate when rushing to get an idea down on paper. That's were revision is so important. I try not to use the same word "very" often, but I make all sorts of allowances for my dialog since I feel it does have to flow naturally.

An edited naturally, without the hems and hahs...

Yes, here is to revision and editing! It's so important. I've read too many books that obviously skipped this phase of the process. Thanks for coming by the blog and commenting.

I feel revision is where the "real" writing happens in terms of making a good story. It's important, though, to take the breaks off when writing a draft so the mind can be freer, although I"m not the typical "shitty draft" writer. I'm a little more careful than that.

I love to cut things when I'm editing. Loooooove it. It feels like getting a great hair cut after a long time. I think it's a benefit of also being a poet; fewer words=greater clarity.

I agree that the story really comes through in the editing. (Too bad that's the hard part for me ...) And I agree with the comment about poetry - I think it lets us see the importance of each and every word. I appreciate the comment!