Fun at TusCon in Tucson - Or Why Cons are Cool

I'm embarrassed to say I've been to very few Cons, even though I've been an avid fan of science fiction, fantasy, and horror since I was a wee child.  Cons seemed kinda scary for some reason.  Even as someone to whom they are directly targeted, I always felt like I wouldn't really fit in.  This is of course nonsense, but I do sometimes think a lot of nonsense.

So off I went to TusCon 40, primarily to give one of the talks in the science track, and to sit on a writing panel about rewriting/editing.  Since they were on separate days I ended up being there for most of the Con.  It started Friday afternoon, which I missed, because I was having dinner at a friend's house.  But Saturday morning came, and with it my talk.  I hung out to hear about the outer planet satellites from David Williams, and to hear about the Chelyabinsk impact from Carl Hergenrother and Vishnu Reddy.  My talk was "Do Extraterrestrials Really Need Water."  I had a good audience, about 30 people, and some good questions and discussion afterwards. 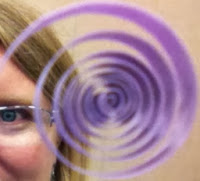 Then I sat down with one of my colleagues and another person who was a writer and a filmmaker to have lunch and chat about asteroids and such.  That was a great deal of fun, and a good way to stretch one's brain.

But then I had the evening open, and sat around wondering what to do.  Well, I was exhausted, so figured I could go get a nap.  But then I noted that one of the 'art demos' in the art room was paper quilling.  I've been doing paper quilling since I was nine, and couldn't pass up the opportunity to sit for an hour twirling paper.  This was fun, and ended up being almost two hours long, sitting with ten other crafters who unlike me had never tried quilling before.

After that it was time for the masquerade, or the costume contest.  This was also enjoyable, both to see some really great costumes, and to laugh a bit at how completely over the top some of them were.  One favorite was a person dressed up as "2nd Level Fighter" who had an arrow through his neck.  But my 'most liked' was a version of Merida from Disney's Brave, who unfortunately didn't win, but them's the breaks. 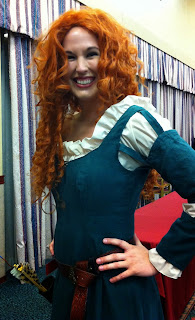 The next day dawned, and I needed to entertain myself before my own writing panel at noon.  So I headed over to the movie room to see a screening of "Heavy Metal."  You may recall in my post about "Top Ten Cult Movie Favorites: Horror" I have "Heavy Metal" listed as number five.  Yes, I have it in horror.  I watched it again at the Con and did not change my mind.  That is some gory, scary stuff.  There is of course the humor, sci-fi, and fantasy in there, too.  But overall, the feeling watching the film is one of unease.  And a few of the animated shorts that make up the film are so horrific they skew the whole movie.  Anyway, I was one of only three people watching "Heavy Metal" at 9:30am, but I suppose that's the nature of a Con.

I then took myself on over to the room with the writing panels and sat in on one about writing as both a profession and a hobby, and the overlap of doing things for fun and for profit, both.  That was an interesting panel, since many of the writers had conflicting feelings about how their writing ran into all the other areas of their lives.  Some quotes from that panel were, "Any creative person is always working," "We are the heroes and villains, we are our own best source material," and "When we write science fiction, we are no longer innocent to the nature of stories; as a professional we lose a certain innocence."  People drew the line between hobby and profession not only by if money was being earned, but also by how much time the endeavor took up in any week.

Then was the panel I was on with rewriting and editing.  I've mentioned it before and so won't go into details, but there was definitely a sense overall that rewriting is where the story is truly made.  That that is the point at which the crafting takes place.  I think I'll write up a blog post about my own ideas and experiences from rewriting; there was plenty to talk about.

I spent the next block of time hanging out in the dealers room, buying a book or two, leafing through old paperbacks, checking out some of the art, and basically relaxing.  There was a lot of creative stuff on display, even for such a small con.

By then things were beginning to wrap up, but not before I got to head back to the video room to see number nine on my cult movie horror list, "The Trilogy of Terror" with Karen Black.  I had not seen that movie for at least twenty years.  The first two were no longer scary at all, but that Zuni doll still has some of it's old horror.  Even when it looks like she is being attacked by a plastic doll (which she is) there is enough blood and screaming to get your hackles up.  Then of course the great ending, with all the teeth and all that.  Yeah.  Good times.

So all in all, I'd say success.  I particularly enjoyed giving the science presentation, and am looking forward to offering the talk at other Cons.  Have to start sniffing around and see who is interested ...