The Alien Visions of Tim Burton 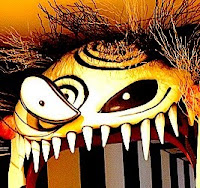 This weekend I had the great joy and fun of seeing the Tim Burton exhibition at the Museum of Modern Art in New York.  As I have mentioned, I work only occasionally in the horror genre (although I admit to a cliched interest in vampires and a minor streak of goth).  But Tim Burton's work does not appeal to me only from a horror point of view.  It appeals to me because it feels so very alien.  The work is strange, otherworldly, unexpected, and bizarre; a great inspiration for some science fiction and fantasy.  I find it fascinating how his vision quickly taps into very hard-wired fears, but in new and surprising ways.  Most of all, I love how his art brings up such feelings of pathos, how it can be so poignant, so humorous, while also being creepy, unsettling, and sometimes disgusting.

The exhibition itself contains concept work, sketchbooks, video, sculpture, movie props and much more.  It presents a chronicle of Burton's work from his early days through to his more well known movie projects.  While I found the black and white work to be evocative in its simplicity, I found his use of color to be when I was the most impacted emotionally.  It is really too bad that the MOMA has jammed all of this in a space about a third of what it really needs.  It was terribly crowded when I was there, as well.  Still my hat is off to them for having the exhibit at all.

Highlights for me included a huge sort of 'mobile' for hanging above a baby's crib.  This might have been the same carousel-like structure that emerges from Beetlejuice's head in that movie, but I'm not certain.  Anyway, the art is about five feet high or so, with circling 'animals', and lit up with black light.  Playing in the background is a disturbing lullaby/carnival tune.  I could have watched it for an hour, it was so wonderfully weird.  I was also pleased to see the 'real life' characters from those of his films I enjoyed most; like Jack Skellington from The Nightmare Before Christmas and The Corpse Bride herself.  The detail of these pieces is amazing, down to the swirling patterns on the train of the Bride's wedding dress, evocative of brocade, and nearly vanished with the ravages of decay.

I stared at the scarecrow from Sleepy Hollow for a long time, wondering what made it so impossibly perfect.  Was it the lilt of the ragged pumpkin mouth, smiling, yet so very toothy and evil?  Or was it the fabric that draped the wooden frame, perfectly shredded and alternating from a glossy and smooth black lame to a ragged, rugged brown canvas?  I want that in my yard this Halloween, but there is no hope of duplicating it.  Another highlight, not so deeply pondered, was the heads of two characters from Mars Attacks, stuck together in a case, much as they were in the movie when they popped off.

I managed not to spend all my time just staring, and took efforts to see the themes and commonality in the work that both give it its power, and that might help inspire me in my own writing.  I'll give you a concrete example of a relation between a theme and a possible use in sci-fi.  One of the themes I have noticed in Burton's work with some creatures is a 'mouths inside mouths' theme.  This reminded me of the alien from Alien, which has a set of inner jaws that deploy from inside an outer mouth (an oddity the scientist in me would have to try hard to justify from an evolutionary perspective).  I noted other ideas and themes that had my mind spinning with concepts for a new creature or two of my own.

Burton's work often revolves around the misunderstood creature, who in spite of personal oddities (say, like being dead, having blades for fingers, having their organs on the outside) is still a person of hopes and dreams, and deserving of our compassion.  In Burton's world, exterior body is not an indication of the nature of the interior soul.  Our usual paradigm of the gross, decaying, and disfigured as symbols of evil is shot to pieces.  I'll go so far as to say that in looking at these creatures we are looking at ourselves, and learning to perceive our own 'personhood', our own value, through the layers of mutation, whatever we may imagine they symbolize.

Neat post about a neat exhibit. I suppose I've seen some of his animated as well as live-action (or perhaps hybrid?) movies, and I definitely prefer the animated ones-- I'm not sure if it's that it allows him to give over fully to his vision, or what.

I know there are some actors who seem to show up in every one of his movies. I wonder if the same is true with animators/costumers etc.?

Really enjoyed this post-very insightful about Burton's vision and well written. We humans often have lovely outsides with tortured souls; many of Burton's characters have lovely souls with tortured outsides. Perhaps witnessing and identifying with a physically "twisted" character allows us to visualize and process some of our own internal pain.

Andy - He does have a set of people that work with him on most of his projects. The idea seems to be that they are already very familiar with his style, and so can inhabit his worlds readily. The stop motion movies like Nightmare and Corpse Bride do lend themselves to a complete immersion experience, since you have already suspended disbelief and imagined the characters to be real. Perhaps seeing 'real' people in such surreal worlds somehow makes it more difficult to become completely engaged. Hard to say, since so much of science fiction is 'real' people in weird worlds, and some of it works very well. Thanks for commenting.

Amy - Thank you for the complements on the post, glad you enjoyed it. The phrase 'tortured outsides' seems very appropriate for Burton's work. I think in a way we all do identify with the 'twisted' character, the loner or outsider. No matter what we show the world, we always want to be accepted for our innate value, and not judged by our exterior.

Thanks for joining me on my blog

Glad you liked it! It was a shame they don't let anyone take pictures, but on top of THEY WANT YOU TO COME BACK, I bet they have good reasons for that :T

The black light stuff was awesome! My favorite piece was the giant ROBOT boy sculpture though~

Rai - Thanks for the comment. Yeah, it was a very cool exhibit. The Robot Boy was great, but I still liked that weird mobile best. I do wish I could have taken pictures, but I bought the book they were selling and several of the piece are in there. Guess that will have to do.