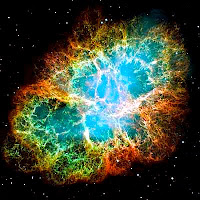 Today is the 20th Anniversary of the Hubble Space Telescope. The impact that this instrument has had on the field of astronomy can't be overstated. Hubble, which images in visible light and the near IR, has taken data that has truly revolutionized our view of the universe. And for those of us who write science fiction, Hubble has provided an infinite well of inspiration.

With a zillion fantastic images to choose from, I chose the Crab Nebula. I did so because this image is tied to an actual observation of an event. The Crab Nebula is a supernova remnant, a swirling collection of gas and dust thrown off of an exploding star. This explosion was witnessed and recorded by Japanese and Chinese astronomers in the year 1054 CE. There are not very many astronomical events of this magnitude that have been seen and then recorded by humans.

This brings home some appreciation for the vast scales and distances in the universe, as well as the mechanics for how things work out there. The Crab Nebula is about 10 light years across. Gas and dust can't move at the speed of light, but still, they were thrown outwards at an incredible velocity. If the nebula is 10 light years across (5 light years in radius, from the center to the edge), then a little math tells us it is expanding outwards at 0.005 or 1/2% the speed of light. One half a percent of the speed of light is 149,900,000 cm/sec for you astronomers or 3,355,000 mph for you English-unit types. Check that again; the nebula is expanding at 3.3 million miles an hour. And that is 200 times slower than the light itself.

The Crab Nebula is about 6,000 light years from Earth. So the light from the explosion took 6,000 years to get from the star to our location. In that time, we looked up and saw nothing amiss, and then one day in 1054 the light washed past us, and we saw the explosion. It's been about another thousand years since then, so anything within about 7,000 light years of the original star now knows that it blew up. 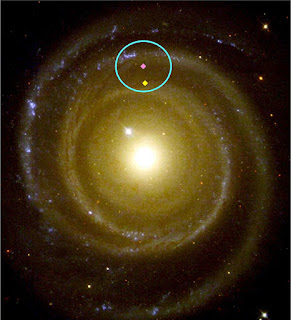 But our galaxy is about 100,000 light years across (or a bit bigger, people are still arguing about that.) Here's a little mock up I did, i.e. the image of the galaxy at right. Let's assume this galaxy is the Milky Way, at 100,000 light years in diameter (This isn't the Milky Way, of course, it is NGC 4622, a nice face-on spiral that I thought would do the job. Our galaxy has more arms, and the central section is more oval-shaped). The circle is drawn to scale at 14,000 light years or so (light expanded from the explosion outwards in both directions, so twice 7,000 years.) The positions of the Sun (lower, yellow diamond) and the crab nebula (upper, pink diamond) are about right. The symbols that represent them are not to scale, as they would be too small to see. But since the positions are correct, you can get an idea of how much of the galaxy you can cover moving at light speed for 14,000 years.

So the only people (assuming there are people other than us in the galaxy, for the sake of fiction) who know that this star has exploded are those inside the circle. Anyone else in the galaxy that happens to be watching has no idea. They see the star as it appeared in the past - the universe is its own kind of time machine.

I think about these scales a great deal when I write science fiction. The bulk of my writing does take place with civilizations on a galactic scale. It is important to remember that a major event in one part of the galaxy won't even be seen in another area for tens of thousands of years. If you have faster-than-light travel in your story (mine usually do), this can cause some interesting phenomena. Someone can look into the night sky, see a perfectly 'safe' place, and choose to travel there. And when they get there they find out the hard way that it exploded a few thousand years ago. I enjoy the way this time and space bending can influence a story.

Love the post! In fact, I linked to it on on my own blog.

Michelle - Thanks a lot! Glad you enjoyed it. I had a hard time choosing an image and an angle for the post, there are so many good options. I might have to do another HST post sometime.

I could look at Hubble pictures for hours. I'm not into SF that much, but I regret they didn't get space travel going so I could experience black skies.

Space travel would have been a great thing to experience. I console myself with the amazing advances in medicine over the last 20 years. Still, I never did get my flying car.