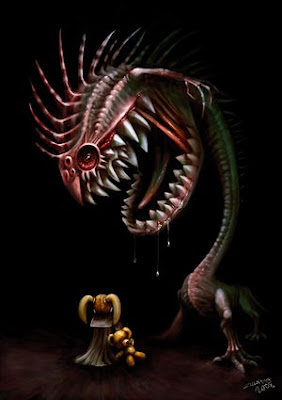 Today, April 1, I start my month of writing a poem-a-day as a part of National Poetry Writing Month, or NaPoWriMo.  (And no that's not an April Fool's joke, although it sounds like it should be.)  I considered several themes around which to base my poems, but could not shake the very first one that came into my head - to use horror art for inspiration.  And not just any horror art, but that genre of horror art that has embedded within it a humorous twist.  The kind of art where the humor and the horror rely on one another to achieve the full effect of the piece.  Given that this is the 'humorous' day of April Fool's, and that I am going to be steeping myself in horror art for the next month, I thought it would be appropriate to lead it off with a horror-humor post.
To be more specific, the kind of horror-humor I am talking about is not the overt kind.  It isn't the kind of horror that is so bad it becomes funny.  It isn't the kind of horror used only as a backdrop for a comic story.
The kind of art I am talking about is the sort that makes you feel creeped out when you look at it, and then feel creeped out about yourself for enjoying looking at it.  For example I offer TheSadDemiseOfLucyAndTeddy.  I am looking at it right now ... and I am smiling.  I am also horrified.  Creeped out.  And I am feeling bad that I think the impending doom of the clearly unsuspecting girl and her stuffed friend is at all amusing.  And yet the art carries the unmistakable imprint of humor.  The end result is that I am disturbed.  Disturbed with myself and with the art.  I find that very strangeness to be compelling.

Another example is much of Tim Burton's work, as I posted about here earlier this month.  We are alternately repulsed and attracted to his sympathetic and disgusting characters - like the Corpse Bride, whose head is full of maggots, and whose eye keeps falling out.  And yet, having seen the Bride "in person" at Burton's art exhibit, I was taken aback by her beauty.  The figure is really stunning in form and detail.  Looking at her in her entirety, we are forced to reassess our idea of beauty, or at least expand our definition of it.

There is one other artist who comes to mind immediately when I think of this kind of art, and that is Edward Gorey.  I was introduced to Gorey's art by a friend who adored his book The Gashlycrumb Tinies first published in 1962.  This is a truly macabre little book of rhyming couplets describing the demise of twenty six children in alphabetical order.  Gorey is also known for his animated work appearing before the series Mystery!  I was always amused by the heroine in that animation who finds herself upon a stone platform with only her feet tied together.  Instead of using her hands to free herself, she nearly faints, and then waits for some dubious rescue.  The point, of course, is that the humorous element is obvious, and yet so is the dangerous setting.

There is something in this kind of work that asks one to go a little deeper into themselves.  To go inside to the place where we grapple with dissonant emotions (perhaps the same place where 'bitter-sweet' dwells.)  The horror element has a bite we simply can't ignore, but the comic element allows us to linger there, soothed by our amusement long enough to abide.  And then we can once again step back, away, and go look at something else not quite so demanding.
How this might translate into poetry for me, I am not certain.  My first few outlines and concepts seem to be leaning heavily on the side of twisted, strange, and macabre, with very little humor at all.  It may be that my writing will not reflect the humor of these pieces, but instead the darkness that dwells beneath.  I'll have to wait for the end of April to see what the muse insists on producing.  I imagine it will be a very entertaining, and disturbing, ride.
Pax
Image Credits:  "TheSadDemiseOfLucyAndTeddy" is used with gracious permission by the artist, zilla774 of deviantART.

My Comments:  I find the piece riveting.  Lucy is small, unsuspecting.  The monster is outrageously huge and slavering.  Although, if not for the title, I might have read any number of possibilities into this piece.  Perhaps Lucy is a bit twisted herself, and this is her demonic friend.  Or her slave?  A beast summoned by her mighty power?  Lucy might be a nasty sorceress in training, you know.  Wonderful ideas for poems and stories abound ...

Artist Comments:  Of this piece the artist says amusingly, "Also known as 'lucy and teddy get pwned. srs bsns.'  Every now and again I seem to get the urge to do this style of art. Isn't it odd how i can swing from one style of horror, to this. Is this my softer side coming out? Go figure." (Even the artist thinks of this as the softer side of horror :)

2) Horror's not my typical thing, but you've helped inspire me to try the NaPoWriMo thing. You can see my first day's attempt, I'm going to try and do 30 baseball poems-- one for each team

Andy - Of course, monster is relative. Maybe the slavering beastie is about to run in fear.

Great to have you along for NaPoWriMo! A set of baseball poems is a great idea. Good luck, and feel free to keep us updated here. I'll stop by and check out your poems!

I was in a poetry workshop a few years ago in which a young woman (who loved Tim Burton, btw) wrote a poem about dismembering herself. At the end, her arms and legs are dancing around the room while she cooks her head in a big pot on the stove and eats it.

We couldn't help giggling and laughing while we discussed this poem, it was so outrageous. At the same time, it was so disturbing and seemed to be inspired by pain. Someone said that he felt guilty for laughing at a poem that was about pain and a desire, or at least a fantasy, about self-harm. I suggested that humor was a very human and appropriate response. It is a healthy emotional cushion for dealing with emotional pain.

I think art like the one here (which is awesome) helps take us to that place. We can confront the darker places of our psyche, but we can feel less threatened or afraid because the humor softens the experience.

Amy - That is exactly what I believe, as well. Something in the humorous angle lets us go a little deeper, or at least to a different place, than strictly terrifying/gory images. The story about the dismembered poem is really interesting ...