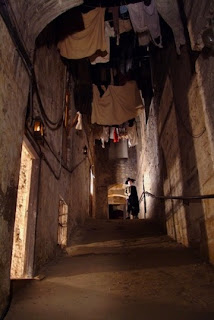 My post is actually about reading Dr. Jekyl and Mr. Hyde, but I have to start with mentioning that I am in the process of phasing out my pen name, and using my birth name for my writing.  I had chosen a nice comfortable pen name to simplify my life into categories, but it has actually made things much more complicated in the long run.  So like Mr. Hyde, the time has come for me to let go of the created persona.  Bryce Ellicott will always be part of my mind's internal writing committee, but for the time being anyway, I've chosen to post and publish my speculative fiction under J.A. Grier.

Speaking of speculative fiction - I'm somewhat embarrassed to say that my education is lacking in the area of speculative classics.  I haven't read either Frankenstein or Dracula from cover to cover.  But I can at least say I've finally read The Strange Case of Dr. Jekyl and Mr. Hyde (J&H, hereafter).

Edinburgh celebrates its most famous authors with a museum dedicated to writers.  I was a little disappointed that it didn't highlight more of the writings themselves, but instead concentrated on biographical information.  I was, however, able to purchase a copy of Stevenson's famous novel and read it while I was in the country.  It felt like something of an obligation especially given that I've already admitted to reading very little Burns.

Stevenson is perhaps best known for Treasure Island but all of his books have some aspect of adventure or the unknown in them.  I was expecting J&H to be more of a standard horror story, but instead it reminded me of other, more psychological works like the Metamorphosis or Crime and Punishment - books that examine good and evil in the human condition.  It paints a detailed picture of the relationship between the main characters, and the shock they experience at finding out that (spoiler here, if you happen to be living in a speculative-fiction-free-cave) J&H are one in the same person.

I've posted a bit recently about how a location or experience might inspire a writer.  Certainly a visit to this location inspired me as a reader.  Let me explain a bit more.  Earlier in the day, I had visited an Edinburgh attraction called "The Real Mary King's Close."  This attraction is a relatively new, 2002-ish, tour under the city of Edinburgh where there are still buried streets and dwellings from centuries past.  The researchers have done a good job of presenting both the factual and more sensational aspects of life in those times to maximize the entertainment value.  Given my own occasionally squeamish nature, I found the whole thing horrific, alarming, creepy, and thus good fodder for stories.

There are rooms in the Close where they know the names of specific people, and how they died of the plague.  There are other rooms where they point to the 17th century plaster and tell you it is made of horse hair and human ash (True or not, it's still creepy.  Do not lean on walls.)  How about the apartment they don't let visitors into anymore since they found the walls were treated with arsenic?  Let's keep going.  Apparently all human excrement, including the blood from animal slaughter, was tossed into the narrow streets to run down to the river.  This was a popular shopping avenue, too, so patrons apparently would stand around inches deep in ... well ... nasty stuff ... whilst buying their daily provisions.  OK, it is not as if I have not encountered descriptions of such life before.  I am a reasonably educated historian.  But it never had the same visceral impact until I toured the streets themselves - the narrow, dusty, dark, foreboding underground streets.  Very effective.

Fast forward about six hours, to my reading J&H in my dimly lit accommodations.  What might have been a mildly creepy story became a very alarming and horrific tale of science gone wrong.  The environment in which the story took place would have been far more like the old streets of the Close than the open streets of the Royal Mile where one now finds stores named "Real Scotland."

It makes me wonder, how can I as a writer bring that "I am really there" sensation to my reader, especially when the setting is a fantastical one?  An author might take the Tolkien approach and dedicate whole chapters to describing the setting.  But that generally makes me want to keep skipping ahead until something actually happens.  There are schools of thought that suggest saying as little about the setting as possible - just sliding in a word here or there to imply the nature of the atmosphere.  But that also does not work for me, since I like to feel far more grounded when I read.

What is your approach?  How do you try to get the reader to really feel like they are present in the setting?  Well, aside from photos.  I don't think I could stomach that with this particular subject matter, literally.

A Muggle in King's Cross Station

Image:  Chapel of the Thistle 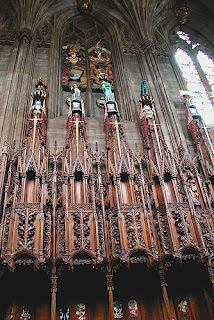 As I mentioned in my last post, my mind has been on the topic of how environment and location can serve as writing inspiration for speculative fiction. I thought I might have spotted a bit of J.K. Rowling's inspiration when I visited Saint Giles Cathedral in Edinburgh. Here one can find the Chapel of the Thistle, home to the Order of the Thistle. Faded light leaks through stained glass illuminating the intricate carved seats, each of which holds the coat of arms of its current owner. I can see how something like this might influence the overarching mood of the ruling structure of the magical world. It is easy to imagine the High Mugwump in the center seat, while grave conversations of magical import lie heavy in the air. There may also have been inspiration here for the Order of the Phoenix as an "heraldic order" of knights errant.

Our trip from Edinburgh to London ended at King's Cross Station. Pulling in on platform seven meant that looking for platform 9 3/4 was almost an obligation. We certainly love the idea of doors to another world. Walking through a wall, a mirror, or an old wooden wardrobe full of fur coats - it is basically all the same desire to be instantly transported someplace new, amazing, and full of adventures. We are captivated by the idea that it might happen so fast, that it might be just around the corner, if only we knew what to look for.

As it stands, the "entrance" to platform 9 3/4 is actually on platform 8, and is a mural painted on the wall with half a metal cart sticking out. This might be a result of all the construction going on, or the fact that platform 9 can't be reached without a valid ticket. But I was not disappointed - you and I as speculative writers are supposed to be of a strong imaginative bent, right?  And it was great fun to stand in a short line of other fans waiting for their turn to get captured on film, pushing half of an immovable cart against solid cement.

I left thinking this - that speculative fiction is the muggle version of magic. Our imaginations create something that is real for us, alone, and then our pens (or computers) make it real for someone else. The magic is that starting place, where one person sees a wall, and another sees a door. Casting the spell is what comes after, when the second person writes a story that lets that first person see the door, too. Even more magical is that no two readers who choose to walk through that door will end up in the same universe. Our spell books have a power we don't quite understand, ourselves.