Being both a lover of science and art, I find few things as enjoyable as an art exhibit that includes scientifically inspired pieces.  Planetary landscapes are so evocative - it isn't surprising that a number of planetary scientists are also artists, recording their visions of other worlds not just through their research, but through art.


The exhibit is sponsored by the International Association of Astronomical Artists, and was organized by scientist and space artist Dan Durda.  The IAAA website states "Space art serves the most basic function of fine art, that of inspiration. It directs our focus toward the space frontier, where human destiny inevitably lies."  More than twenty artists contributed thirty four pieces of art to the exhibit in a variety of media including pastels, watercolors, oils, and digital creations.  Some of the art has a traditional 'space art' feeling, while other art moves in a different direction, using unusual materials and perspectives.


The piece "Yelland and Ino" by Monica Aiello caught my attention immediately, being so accurate at depicting a planetary surface and so aesthetically pleasing at the same time.  A close examination reveals that this is not a painting at all, but a creation of fiber and acrylic.  The cracks in the surface are created by yarns and threads in straight and arcuate forms.  The whole is covered with a clear acrylic that mimics the icy surface of the satellite.

I enjoyed Marilynn Flynn's "Titan's Southern Summer" for a number of reasons, one being the depiction of a canyon so like the desert southwest that I adore.  But this is a frozen world of methane and ethane, with a tilted Saturn high in the murky sky.

One of the few pieces depicting alien life is Dan Durda's "Jovian Atmosphere."  These jellyfish-like creatures remind me of the classic idea of 'floaters' and 'sinkers' in a giant planet's atmosphere.  Many of these pieces have land and sky-scapes inspired by views of our home planet, then translated to appropriate contexts in the rest of the solar system, or universe at large.

The exhibit in question, called "The Artist's Universe" is on display at the annual AAS Division for Planetary Sciences meeting, held this year in Denver, Colorado.  So while the scientists peruse poster presentations of the latest scientific results, they can also stop by the exhibit, and take a moment to remember why we all do this science stuff in the first place.

Because it is amazing, cool, and amazing.  And very cool.

Musing About The Talisman Universe 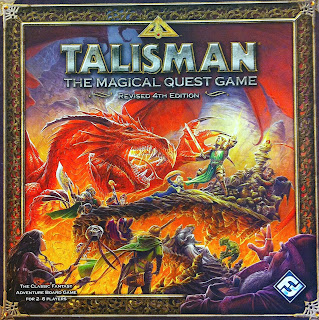 A recent round of the board game Talisman has me obsessing over the game ... again. This is one of those games that seems to polarize people - either you love it or hate it. I conducted a very small and quite unscientific survey to determine what it is about Talisman that is so very appealing, or for many, quite the opposite.

First of all, if you haven't played the game it is worth the time to check it out. No really. A geeky friend (like me) might be hiding a copy. Looking at the box top for the most recent (fourth) edition, you can tell you are going to be in for a good time. You can see a variety of characters attacking a dragon (or perhaps being attacked by a dragon) that is guarding a crown. Naturally, this is completely atypical of how the game play actually feels, and there is no dragon guarding the crown. Still, you can see the fighter being all fightery, the magic users casting spells, the thief ignoring all of this and trying to get the crown on the sly, and the assassin sneaking up to stab the thief in the back. And the sorceress, I think, is there with huge bubbling pot of some potion in one arm and her staff in the other. It can't be easy having to go into combat with a caldron as a a key part of one's melee strategy.

The first version was printed oh, so very long ago, and ended up having a plethora of add on modules, cards, characters, and more.  The setting for the game is a sort of high fantasy realm where encounters on the board can increase or decrease your statistics, such as strength, craft, and number of lives.  Needless to say, when you are out of lives, well, you are out.  (Unless you go ahead and start a new character and jump back in.)  The art from the original game was quirky, whimsical, occasionally silly, and the source of about a million inside jokes in my family.  Of particular note was the art for the "toad" card.  Much more ignominious than getting killed to death in this game is being turned into a toad ("toaded" as we say) by a witch.  The toad card had a rather outraged and startled expression that was certainly apt.

It became hard to have all the expansion modules open at once without say, three tables and a sizable part of the floor available.  It was so big that you might spend an entire game poking through the Talisman universe and never encounter another player.  The expansions included a tower to the ultimate dragon battle, a catacombs, a full blow up of the one City tile into a new whole board, and a sort of outland futuristic board with strange worlds, aliens, radiation, and bizarre new artifacts.  I'm sure I am forgetting something, because there was so very much.

In more recent times, the game was rebooted without all the expansions (as I said, it is now up to a fourth edition) and this one seems to have the charm of the original without quite so much of the crazy.  Although I really liked the crazy.  It is hard to explain how crazy the game could get, actually.  Each of those old expansions added an entire new piece of board space.  Little words to wander around in.  I'd forget there was an objective to the game and get lost in exploring and seeing what cool stuff I could find.  Getting distracted was a good way to lose, but I always had fun. It was a wonderful romp through all kinds of speculative goodness - fantasy, horror, and even a bit of sci-fi thrown in for the canonical good measure.

This new version is more palatable to those of my friends and family who do not have an affinity for the game, in general.  But by more palatable I mean they will play under extreme duress, instead of not at all.  Alright, I can see that any game that regularly goes over two hours can be a drain.  When you have more than three people playing Talisman, you can probably guarantee a three hour play time or longer, unless someone has a whip and a timer.  But there are many involved strategy games that have long play times that are not as divisive as Talisman.  So I'm tabling the play time as "problematic, but not a show stopper."

So what is?  My survey suggests that the unguided nature of the game - without specific benchmarks on the way to the final objective - is the real issue.  The game moves forward in a very free form fashion.  You can move in either direction on the board, wandering wherever you want, encountering the spaces of the board themselves or drawing cards.  Over and over and over.  The point is to get yourself tough enough with increased stats and/or great stuff and/or followers and definitely a mule early on or you can't carry all that stuff so you can fight your way to the center, grab the Crown of Command, and basically command all the other players to die off.

In addition, there is a random element to the game that means you might lose your nice high stats, or some of your followers, or - flying spaghetti monster forbid - you could lose your mule which is carrying all your stuff.  This means you can spend the entire game getting nice and buff, only to have it all taken away at the last, most heartbreaking moment.  I sort of like this aspect, since I like the fact that anyone can win the game.  You don't know however many turns in advance that you have no chance at all.  There is always a chance.

The final aspect of the game that seems to rankle the unbelievers is the rules.  There are not actually too many rules, but the complexity of the game means that they are always being checked and rechecked.  Then when you realize there is no official ruling for the situation you are in, you either have to make up a new house rule, or take a break from the game to go surf the intarwebs for possible solutions, or at least other people's house rules.  Yes, you guessed it, I kind of like this.  I enjoy when strange situations come up and we have to deal by a sort of community vote on what "makes sense" or what goes with the spirit of the rules, or what seems fair, or whatever will keep the game going.

So there is my Talisman game breakdown.  It's a game I love and long to play, while others whom I know want to play pretty much anything else.  At all.  Please.

What's your take?  Have a talisman experience to share?

Image Credit:  Me and my Talisman game.
Posted by JA Grier (ee/em/eir) at 3:40 PM No comments: