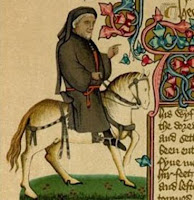 The British Library in London has an amazing display of old, even ancient, classic books and texts.  The exhibit takes up only one room, but it is impressive anyway given what is in there.  I do not usually take notes when I am browsing a museum.  I like to feel as though I can do whatever my muse dictates, and not feel self-conscious about my meanderings.  But this time I felt compelled, since I knew I would not remember all the details of the fascinating works if I didn't record a few specifics.

One of the oldest items to catch my attention was a copy of the "Gem Hup Sutras" dated from the 3rd century AD.  I was drawn off at that point by a special room dedicated to the Magna Carta.  Four copies of the Magna Carta still survive; issued first in 1215 and revised a few times until 1297.  This was the document that presented the idea that the law was a power in its own right, and even the King was subject to it.  The library also exhibits an original copy of the 1410 Canterbury Tales, of which apparently 80 copies are in existence.  The illuminated text is definitely more impressive in person, as always seems to be the case.  (I remember seeing the Mona Lisa for the first time, wondering 'why is this so famous' and then getting up close.  It is, in fact, rather spectacular.)  One presentation case was dedicated to Leonardo di Vinci, and had a notebook and loose papers with dates from 1496 to 1508, including Notes on Arithmetic, Studies of Mechanics, and Notes on Architecture.  The collection included music, like the earliest known draft of Handel's Messiah, dated 1741.  It is fascinating to me to see such drafts, where notes are inked in, then crossed out and replaced with others.  Unlike a single word in a novel, we know each and every note of the melody of these pieces today.  And then there were some of Jane Austin's original notebooks and journals dating to around 1792, from when she was 12-17 years old.  Looking at these works is so inspiring - books are powerful.  As a group they represent so much human thought, history, and culture.

While I don't imagine to produce something as profound as these works, seeing them still motivates me to write, and to dream.  I'd love to hold a hardback book in my hand, something I wrote, with intriguing space/fantasy art on the cover, great quality paper pages, and that distinct, exciting new-book smell.  I want to sign them, give them to my friends and family, and say, "Meet these people I care about and go on this adventure with them.  I hope you love it."