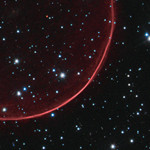 Your characters have found a boundary before them.  It was not put there intentionally to bar their way, but nevertheless, it blocks their path.  They cannot break, destroy, or banish the boundary.  How do they pass by or through it to continue on their way?  Write your thoughts in 150 words.

A common trope in myths, fables, and fantasy is that of the construct that becomes "real."  This theme is compelling to us for two reasons.  The first is the desire of every artist to see their creation truly come to life (figuratively if not literally).  The second is the desire of every person to transcend a certain condition (flaws, flesh, etc.) and become something greater.  This second idea is related the concept of salvation, that base mortality can somehow be transcended to perfection.

There are many ancient religious stories that have this theme.  An obvious example is in the Bible, where God fashions man out of clay and breathes life into him.  This is often read to be a portent or promise, where after death flesh itself will be transcended into an existence even more real.  In one version of the Prometheus myth, it is he, a Titan, who fashions mankind out of clay, and Athena who gives it the ability to reason.  It is no surprise that humans, who are so creative, would want to see their own ideas take shape and life.

As with the Biblical account, many stories have a supernatural entity of some kind who provides the actual power for changing what humans have created into a living creature.  In the myth of Pygmalion, it is Venus who turns his statue into a woman.  In the Disney version of Pinocchio, it is the Blue Fairy who first animates the wooden toy, and then later turns that toy into a real boy.  The Velveteen Rabbit becomes an actual rabbit the moment he is kissed by the Nursery Magic Fairy.  However, in each of these cases the driver for the creation to become real is the love of another person: Pygmalion, Geppetto, and the boy who owned the rabbit. The supernatural force provided the power for change, but only after a human already loved the creation.

In more modern times, it is science fiction that has grappled with this theme.  In science fiction, the trope is often that of humans seeking the power to create life, themselves, without the need for supernatural influence.  Frankenstein and Metropolis are two examples of humans attempting to create something like a living person, and meeting with mixed success.  I would suggest that both these stories underscore the idea that love still matters.  If a creature is created without love, or is not loved after creation, it cannot truly become human.

Of course the idea has been taken in any number of directions, including the movie Weird Science and in the character of Data on Star Trek.  I think it is particularly interesting to note that Roddenberry's intention was for the Data character to become more and more human throughout the series, but not quite get there.  A major part of this transformation was Data's acquiring a chip that allowed him to feel and express emotion.  I have this idea that Data did become fully human the moment he made his ultimate sacrifice to save others.  Again, love was what was required.

Which of course brings up the question of where this trope can and will go in the future.  I really like the idea that the real power to become human lies with the creation itself, not with any supernatural force, nor the direct creator.

What are your ideas?  What is the next incarnation of this theme in speculative fiction?

Image Credit:  A fada azul by noprips, Priscilla Tramontano on deviantArt.  Tramontano is a Brazilian artist who has been on deviantArt for eight years.  Of this piece, the artist comments, "Consider this as my own version of “A fada azul”, or, "the blue fairy", the good lady who had turned Pinocchio into a real boy. Wooden boys are sooo last century. But Robots? Yeah, now we are talking."  This amazing piece is used with permission of the artist.  I found this image captivating from the very first time I saw it.  The expression on the robot's face is somehow so plaintive.  And the concept of the "fairy" being in a space suit is so unique.

Brilliant Writer Award Thanks, and Other Updates 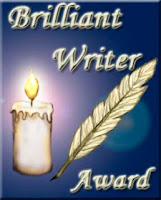 Many, many thanks to Deirdra Coppel at A Storybook World for presenting One Writer's Mind with her "Brilliant Writer Award!"  It is always an honor to have the blog get positive feedback from other bloggers out in the speculative fiction community.  I really enjoy blogging, mostly because it provides a chance to connect with other fans and writers of the stuff we all love.  So thanks to Deirdra and to all my followers and readers!

As far as updates, NaPoWriMo has ended and I did indeed produce more poems.  I didn't manage to create one a day but I ended with sixteen drafts.  Two of them are actually not bad at all so I'm feeling good about my effort for the month.

Apparently these crazy challenges like "write 30 poems in one month" or "write a novel in a month" actually work for me.  Since I've also been thinking of going into a short-story writing blitz, anyway, I've decided to try another of these crazy challenges.  The idea is to write one story a week for 52 weeks in a row.  I was inspired by Nicole at Rivera Runs Through It and couldn't get the idea out of my mind.  Now, I've seen this idea roll around for some years and have always talked myself out it.  Not this time.  I am tweaking the rules for myself to be 52 stories by May 1, 2013.  Naturally, the target is one a week but given my travel schedule I might write some ahead or have to do catch up.  Anyway, there is my stated intent - should be a very interesting writing year.