I picked up the August 2011 edition of Rue Morgue magazine because it had "Fright Night - Revisited and Revamped" on the cover.  Yes, I am a vampire fan, and that is one of my favorite vampire movies of all time.  So I nabbed the magazine for later perusal.  Took me a month and half to have the time to open it, and then when I did, it wasn't the Fright Night article that demanded my attention. 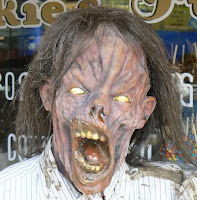 Instead, it was an interview with Gunther Von Hagens, the force behind the creepy, fascinating, and provocative "Body Worlds" exhibits.  The article is subtitled, "On morbid art, controversial science and facing his own mortality."  I am a scientist, a speculative fiction writer, and a patron of romantigoth.  My mind is trying to reconcile the meanings and implications of Body Worlds, the process of "plastination," and the person of Gunther Von Hagens all at once, and the cognitive dissonance is going to make my head es-plode.  (See photo, zombie person, mouth wide.)

It's October; the month for us horror buffs to reach forth and express ourselves to our personal utmost.  For me, that includes holding a haunted dinner party, checking out bizarre art on deviantArt, and allowing my interests to roam places that normally squick me.  Like Body Worlds.  My interest in horror tends to romantigoth, as I've mentioned.  Goth is not about death, as much an outsider might think it is.  Goth is an aesthetic.  Romantigoth in particular is filled with shadows, mystery, longing, and a deeply emotional sensibility.  The icons might be spiders, skulls, blood, fangs, and black lace, but the goal is the creation of an atmosphere that matches the emotion. 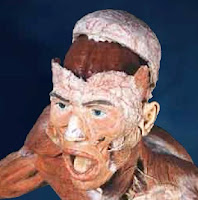 Body Worlds is anything but romantigoth.  It is brightly lit, with the mystery of the inner workings of the human body laid bare.  There are no secrets here, as there wouldn't be given that the stated purpose of Body Worlds is to "educate the public on anatomy, human physiology, health and wellness."  And yet there is no escaping the comparison to horror - zombies at the least.  In Body Worlds, the skinless dead are shown riding horses, having babies, ice skating, and having sex.  Yes. (See photo, plastic person, mouth wide)

Anecdotes suggest that some people do leave the exhibits, after seeing diseased lungs and livers, and give up smoking and drinking for the rest of their lives.  I also have no doubt people know a lot more anatomy after they leave, as well.  But I cannot get over the fact that these are real dead people, not mock-ups or models.  I can't even handle a visit to the mummy exhibit in the Louvre.  I can't even look at the mummies of cats in the Louvre.  First of all, it makes me sad.  Dead is dead, after all.  Second, it seems so 'not right' that we have taken bodies from burial sites without their permission and turned them into exhibits.

This exhibit, as well as the mummies in the Louvre, say, are hardly the first time human remains have been displayed (even used as art) and promoted for general viewing.  For example there is the "Our Lady of the Conception of the Capuchins" cathedral in Rome.  A few lines from Wikipedia - "The church is most famous as an ossuary, known as the Capuchin Crypt, in which is displayed the bones of over 4,000 Capuchin friars. The bones are fashioned into decorative displays in the Baroque and Rococo style. The popularity of the crypt as a tourist attraction once rivalled the Catacombs."  I don't think education about skeletal structure was the point, here.  We humans want to find a means to go on forever, and whether it is our agreeing to be mummified, or others using our remains to create art and educational exhibits, I think a large part of it stems from that desire for eternity.

Now, the people whose remains are exhibited in Body Worlds did indeed leave permission, so that part at least is fine with me.  Strange, but as a scientist,  I understand that people would want this; would want their remains to go on teaching after they have no more use for them.  In the past, such bodies might have been used for dissection, or have individual organs removed for examination, etc.  Until recently, the idea of leaving your entire body behind, infused with plastic forever, was not an option.  According to the site, there are about 11,000 donors for "plastination" currently on record, about 1000 already dead and another 10,000 who are still living.  I think it is unlikely that all of these people have education of future generations as their major goal.  Instead, I think for many this is another attempt by the human mind to achieve a form of immortality. 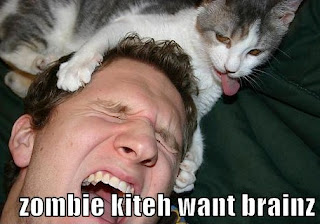 After all, humans have been fascinated forever with the questions of what is death, what happens after death, what can we do to put death off as long as possible, and why is it zombies eat brains, anyway?  Okay, so the plastic people on exhibit are not really zombies.  But even the idea of zombies itself comes from our continued fascination with death and undeath.  For some, I imagine zombivication is their ideal choice (as I said, I'm more the vampire type.  Zombies are gross.)  Being bitten by a zombie usually means you become one.  It is immortality, after a fashion.  Hopefully they really, really like brains.  (See photo, man attacked by zombie cat, mouth wide.)

Touching Science, and a bit of Sci-Fi, in the National Parks 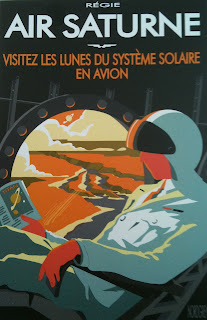 I'm spending the week in Nante, France attending an international planetary science conference.  This year we are having a joint conference between the European Planetary Science Congress, and the Division of Planetary Sciences of the American Astronomical Society.  I'm looking forward to getting updated on the latest mission results, but even more, I relish the chance to interact with people who over the years have become as close as family.  It's always a great geek fest.

I am a strong advocate of the involvement of scientists in education and public outreach, and have long been a fan of natural settings to bring science and people together.  Planetary science and public engagement has a perfect nexus point in the National Parks.  Many of us have looked upon the geology of Earth in these places and seen there the landscapes of other planets, real and imagined.

I noted a poster presentation here at the conference by Tyler Nordgren that focuses directly on this subject.  I had not realized, but Nordgren published a book on just this topic last May entitled Stars Above, Earth Below: A Guide to Astronomy in the National Parks.  I haven't yet had a chance to peruse a copy, but I'm looking forward to checking it out.

The picture above is featured on Nordgren's poster presentation and conference abstract (1).  It is quite eye catching, and one of a series that uses a mix of old travel posters and a bit of science fiction as a hook to engage the viewer.  It also illustrates the ways in which science and science-fiction are merging in planetary sciences today.  This trip hasn't happened yet, but it is easy to imagine it.  Looking at the landscapes of Earth, it becomes that much more clear what visiting other worlds might be like.  Comparative planetology has always been a strong tool, and Nordgren notes the example of "the relationship between geysers in Yellowstone National Park with recently discovered geysers on Saturn’s moon Enceladus" as a way to create a touchstone between here and there.

The sci-fi fan in me wants to go on that trip in the poster.  Really really badly.  That's part of why I became a scientist to begin with, so I could get that much closer to such a dream.  In the National Parks we have another means to get "that much closer" - the dark skies and evocative landscapes of everyone's favorite planet, Earth.