Imagine a Ring Around the Earth 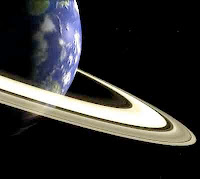 This particular youtube video has been making the rounds for the past couple of weeks.  It is a conceptualization of the Earth encircled with a ring system identical to Saturn's (except resized to fit our much smaller planet). It starts with views of the system from space, showing different perspectives and Earth's shadow on the rings. Then it shows what these rings would look like in the sky over several famous locations.

I've enjoyed watching this video for several reasons. The first is the simple pleasure of seeing beautiful and interesting places recast from such a fantastical point of view. But I also enjoy the video from an education standpoint. It attempts to illustrate why the rings would look different from different latitudes, and does a pretty good job at it. Of course, the general public might be confused as to why someone would want to see Saturn's rings around Earth in the first place. So that confusion might muck up any educational message. 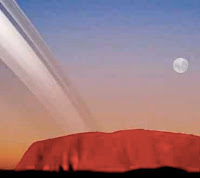 And the third reason I like the video is, of course, that it gets me thinking. Looking at the 'view' from Ayers Rock in Australia, for example, with in the rings and full moon on display, is so intriguing. How would human mythology differ had we had such a spectacle in our sky? How would the development of agriculture, navigation, and mechanics have changed if rings had been a part of our everyday environment? Would they have allowed us to understand more, and faster? Or would they have been a source of confusion, making it even more difficult to figure out what things were made of, how far away they were, and their true scale? 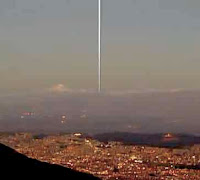 And the inspiration for the sci-fi muse needs no explanation. The thing that strikes me, looking at the image of a thin, edge on ring view from the equator, is how it resembles the ring in Larry Niven's Ringworld. Of course, it's quite different. Niven's Ringworld was a huge ring that encircled a star at a distance of 1 AU, and it had an entire ecosystem lining the inside. But from anywhere on the inside surface of the ring, the rest of the structure would appear to arc away into the distance, arching above and around the sun. One character was convinced that distant arch was a structure he could walk to, and was spending his life in an impossible pilgrimage to reach it. Never realizing that he could circle the entire star and never 'reach' the arch that was always right beneath his feet. What else do the images make you think about? What stories have been written with rings around the Earth as the premise or setting? I'm coming up short on that one. Which makes me think again about how this might be more sci-fi story fodder.

I've enjoyed that video, also. I think the question of whether we'd have a moon at all with a ring isn't clear to me. Certainly, you could imagine gaps and perturbations in the rings associated with the Moon if it were there.

I imagine it would very quickly become clear to people that the world was spherical if there were a ring. The ancient Egyptians/Greeks/Babylonians etc. would have a much easier time measuring the width of the ring at different latitudes and extrapolating to a correct size of the Earth also, I'd guess.

On the other hand, I could also believe that the ring could be a negative for early astronomers-- first of all, it'd blast any faint objects away. Second, it might be very hard to figure out what's going on with the part that's in the Earth's shadow (or maybe I'm not giving people enough credit). Third of all (though similar to the first), there'd be whole swaths of the sky rendered unobservable by a ring, as well as portions of planetary orbits...

Thanks for the comment - I agree that our moon would certainly have a gravitational effect on any ring system. The Cassini division is caused by a resonance (as you know) so I'm assuming if we could manage a stable ring system, it would have some other density-gap pattern. The brightness factor is a good one to point out. It would be a real trick to pick out the faintest objects with that ring system always at least partially illuminated. Even an eclipse wouldn't help.