Mixing Genres in Spec Fiction - Some Pros and Cons

Art: Not an Atmospheric Phenomena by julian399 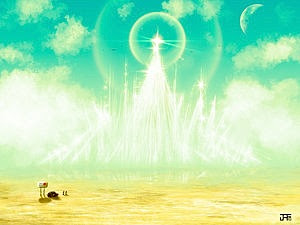 The topic of mixing genres has been on my mind lately. As I consider the issues surrounding the publication of my work, the subject of genre mixing keeps coming up. So I thought I would first post about the pros and cons of blending genres within a piece of writing. And then I'll follow up on a post with some tips for doing it in ways that enhance your efforts.

I think that absolutely the first thing to do is to understand, concretely, what your eventual goals are for being a published writer. Some people want fame and fortune, and nothing less will do. Still others want to find a tiny niche audience and become a cult legend for those two thousand people. Some people write because they want to push the envelope of technology, of what writing means, and how it is accomplished. And others, like myself, write the stories they do because they feel compelled, and just hope they can create something in the process that people want to read.

With that in mind, it is easy to see that what might be a pro about mixing genres for one person will be a con for the next. So I can't just make a 'pro' and 'con' column for this post. Instead, I'll call out a few key points.

One point is that mixing genres can confuse the publisher.  They don't know how to clearly pitch the book, how to create obvious cover art, which audience to target it to, etc. In a post called "For the Love of Pete, Don't Mix Your Genres" the author, Justin Allen, gives humorous advice to writers about how to make publishing the most straightforward. "So do yourself a favor and stay right in the middle of the publishing industry’s wheel-house. Give them a book with an obvious cover and a story that is immediately recognizable; one that won’t offend liberal New England schoolmarms with its depictions of guns or violence, or conservative Southern aristocrats and Western individualists with any themes suggesting ecological conservation or multicultural understanding. If at all possible, make your book ‘literary.’ That will ensure you the chance of at least one big payday."

This is clearly tongue-in-cheek, but yet accurate. This advice is useful if you want to be rich and famous and don't care what you write. For someone like me, this advice isn't useful. I am thinking about the places where my stories mix genres on the sci-fi/romance line. I do not intend to change my writing because someone finds the gender balance in the relationships offensive. One of my species has seven genders. One of my species does not have any genders. Our own ideas from Earth do not hold in such an environment. I'm not making my sentient species suddenly all dual-gendered and giving them equivalent moral standards on relationships. It makes no sense in the context of the stories.

This probably means that Walmart, one of the biggest sellers of mass market paperbacks in the country, will not sell some of my books. Very well. If I get published to the point where that is even an issue I'll consider myself outrageously blessed.

Another point goes back to the idea of categorizing and marketing your book. It will appear on only one shelf in the bookstore, and you have to pick a category. A mixed genre book will be hard to place, and may miss some people who might like it very much because it simply won't be in "their" section. This does seem like a con for everyone who mixes genres, but again, it might be less of a problem if you only intend electronic publishing, say.

Mixed genre writing also needs the writer to understand the basic formulae and structure of all the included genres. This could be a con in that it makes the writing more difficult, and it can be a pro because the book might end up being quite a bit more interesting.

At the moment, certain mixed genres are very trendy, say like urban fantasy/horror. So one pro of mixing genres is that you might find your writing is hitting a sweet spot of popularity. Yet, just as certain mixed genres become trendy, they also fall out of popularity, so you can't count on a trend lasting long enough for you to ride the wave. Still, mixing genres can give you an opening where "popularity" has closed a door. I enjoy writing and reading space opera; with governments vying for galactic power, fleets of warships doing battle, and threats of planetary destruction. Yet at the moment, the wisdom is that space opera is out, too overdone. As it is, some of my work retains additional marketability because it is not straight sci-fi. I've mixed in strong fantasy, as well as romantic elements, which make the story more quirky and less predictable than your standard space opera.

Back to the post above. The author also says, "As a writer between genres you can be your own boss, ignoring and embracing the usual tropes and traditions of the movements in whose shadows you walk. You can work toward a uniquely American vision of fantasy, horror, or romance – casting off the shackles of the old world with a shout of “Live Free or Die!”"  Again, this is intended as humor, but remains true. A pro of genre mixing is this flexibility, and sense of uncharted territory ahead.  Of course if you get lost, you are on your own.

What are your thoughts?  Other pros and cons of mixing genres in speculative writing?

Image Credit: Not an Atmospheric Phenomena posted with generous permission by the artist, julian399 on deviantArt.com

My Comments: This piece could include elements from a range of speculative genres like urban fantasy, science fiction, straight fantasy, psychological thriller, mystery, or even horror.  What is the story of this strange castle or structure?  Why is it in the desert?  What is the meaning of those machines flying above it that look so much like helicopters?  Is it a threat, or the appearance of a once-in-a-hundred-years sort of Brigadoon?  Or perhaps the title is ironic, and it is, in fact, only an illusion.  (Again, I suggest taking a look at the high resolution image on the deviantArt site to see the piece in detail.)

Artist's Comments: "What we saw in the deepest part of the Sahara Desert was definitely not a military installation like everyone says... but rather a giant crystal citadel towering and glimmering brightly in the heat of mid-noon... are they lying to us about an installation? Or is that it!?"
Posted by JA Grier (ee/em/eir) at 1:55 AM

I am mixing genres in my story arc, and I'm not certain how it will be received. My first book is stand-alone as fantasy, with just hints of sci-fi. Will those hints throw people off? I'm not sure.

The next stories are almost pure sci-fi, though they make it clear why the fantasy book had all those hints in them. I guess I'll just have to see how it goes, whether any publishers will ever touch my stuff.

I wonder how much of my impression of what "cross-genre" means for me comes from role playing games. I accept zombies sharing a universe with elves and dragons because of D&D, though it seems equally clear some how that vampires "don't belong" in the Lord of the Rings saga. My enjoyment of alternate history stories probably doesn't help either. :)

Ted - Thanks for reading. I'm sure there is someone who will publish it. A really good book about any subject always has a chance. Given that mixed genres are becoming more common, the chances only get better. Good Luck!

Andy - Good point. Games of all kinds, role playing, computer, video, etc., have had a huge effect on the genres. Stuff like 'Arcanum' which was steampunk with elves and dwarves, as well as 'Mass Effect' with its zombie-like 'husks.' On and on. Perhaps there isn't so much an issue with readers, as there is with the simple mechanics of how to publish and market such a book.