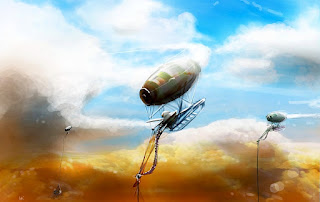 I see I have managed nothing but writing prompts for the past few weeks. Haven't been producing the word counts I like to see, and I have several short stories languishing here on my computer that should be out on the street. I've been concentrating on other issues, like the poetry contest at the SFPA I posted about. So I imagine this somewhat sorry state of writing affairs will continue until mid July, when that wraps up. But that's one of the reasons I started this blog, as a fun way to keep myself motivated to write. And the heavens have cooperated with a little planetary display that has gotten me off of my duff for a real post.
I am generally partial to planets with solid surfaces, and then am biased to rocky planets as opposed to icy ones. Still, Jupiter has diverted my attention, as well as the attention of many others. Recent events have underlined just how cool a gas giant planet can be. Atmospheres always emphasize the human fascination with things that constantly change, and yet stay the same. Seasons, for example. We love to watch the seasons change, but mostly because we know that winter will always give way to spring. Constant change, but within a known pattern.

Jupiter has a number of cyclical patterns that change its atmosphere - some of which are pretty dramatic, (as noted on Emily Lakdawala's great blog over at the Planetary Society, AstroBob, Bad Astronomy, and others) About a month ago, amateurs noted that the wide, nearly ever-present dark band around the southern equatorial region of the planet was ... gone. Yep, just gone. (Note pix - also note that the Great Red Spot is still there, just on the other side of the planet.) For those unfamiliar with the cyclical changes on Jupiter, this was a pretty big shock, and a striking change to the look of the planet. But such a dramatic change isn't unexpected; the southern equatorial band disappears every three to fifteen years, and then comes back again. The return is actually a pretty dramatic event, too, so it is worth keeping your eyes and ears open for Jupiter news.

Of course, when I see things like this, I imagine what the good, solid, scientific reasons might be, and then what the fun, bizarre, speculative reasons might be. For example, maybe the atmosphere of a gas giant could be altered by a planet-wide gas mining operation (as seen in the art, above). A gas giant like Jupiter might give the impression of possessing an infinite quantity of resources, but like the Earth, any planetary resource will eventually run out. Or be handled in such a way as to eventually destroy the environment that supported the resource. An interesting idea - contemplating how such mining might be approached. In Star Wars, Lando Calrissian was the administrator of the Cloud City Tibanna Gas Mines. We weren't given all the details about exactly how or why that operation was carried out, but it definitely sounded cool. (Although apparently "tibanna" is some kind of "rare form of matter naturally found in the state of a gas." Definitely not enough detail ...) 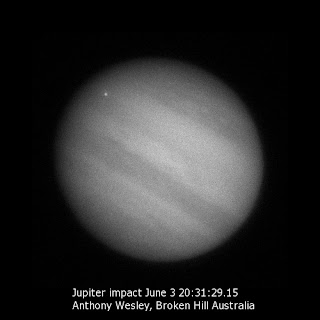 I was planning to end my post there, but then Jupiter experienced another interesting event. The image shows a bright flash in the southern hemisphere (image is south to the top). This was probably caused by an impact event, smaller but basically the same as the Shoemaker-Levy 9 impact events of about fifteen years ago. Jupiter possesses the high gravity demanded by its high mass. Such a gravitational well and big target means impacts into Jupiter's atmosphere are constant. They are into the Earth's atmosphere as well, but bigger stuff hits Jupiter more often than Earth (fortunately for us).  This same astronomer found the impact scar of another event in 2009.  That scar was different from the cometary impacts of SL9, indicating an asteroid impact.  We are not yet sure what impacted Jupiter this time.

Amateur scopes and image processing equipment have now reached near-professional levels. Because of this, even smaller events that happen on the planets are rarely missed. This gives us a new appreciation for how dynamic and changing our solar system really can be. And, of course, it gives us plenty of new ideas for speculative writing about the topic.
Pax
First Image Credit - Gas Giant Mining Drone by Betelgeuze01

My comment - This naturally caught my eye as I was thinking about the atmospheres of giant planets. I am rather irritated by the non-explanation of "Tibanna" in Star Wars, since I always prefer more detail. But what gas would a civilization really mine? We have plenty of hydrogen, already.  However, if I do think of a good reason to mine the atmosphere of a gas giant, it will certainly appear to my eye as something like this great piece of art. The blimp-like mining robots seem both unique as well as functional for their appointed task.
Second and Third Image Credits - Anthony Wesley, Australia.  Known 'amateur' astronomer.  Making observations that once upon a time even the professionals could not make.
Posted by JA Grier (ee/em/eir) at 8:36 PM

That 'impact event' is really interesting. Terrific post, really gave me a couple of ideas to pursue.

I have to admit though, I'm biased toward the icy planets. Don't know why, just am.