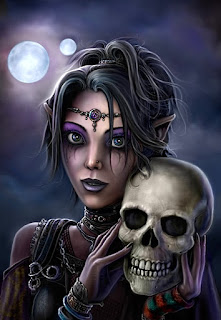 The damsel in this piece of art has clearly found her inspiration - old Yorick - still hanging about to witness the mischief the living can conceive. Apparently, after having been unearthed by a gravedigger in Hamlet, the skull has been passed around until the modern age. He's now found a lady whose "gorge" does not rise at the sight of him, unlike how he once disgusted Hamlet.

Nor is he "abhorred" in our imagination, obviously. It has always intrigued me how this symbol has endured through the ages. Of course, Shakespeare did not invent this concept - the idea of comparing life (the once jolly jester) to death (his skull). Yet it seems to me that it is Hamlet that is responsible for making the image so compelling.

By the time Hamlet was written, about 1600, skulls were already a common sight in portraits. In addition, there was a theme in art that persisted through the 17th century known as "memento mori" or "remember you will die." Not only did the text itself often appear, but symbols such as skulls were used to underscore the message. So there was (and is) no dearth of symbols suggesting we contemplate our fate. Yet now if we encounter a person with a skull in writing or art, we immediately think of Hamlet and Yorick. It seems to be the instance around which our imaginations have crystalized the idea of "memento mori."

However, when I climb into this particular piece of art, I am not overwhelmed by the macabre at all. There are too many elements here suggesting there is more going on than meets the eye. This is a world of two moons, and where the people have elf-pointed ears. The protagonist is lightly smiling. Perhaps a skull brings to mind more of a remembrance of those who have passed, like the Day of the Dead, rather than a solemn consideration of our own mortality. And we can take it as far as we like, being fiction writers. Perhaps that is a human skull, and she is something else entirely. Is she an immortal creature? Perhaps she is laughing at us. Or maybe she can hear Yorick's voice loud and clear.

Naturally, Yorick has inspired more than a pondering of our fates, he has also become an inspiration for dark comedy. Regardless of how grim the message might be, there is something farcical in a person who carries a skull around like a friend. As I contemplate another Halloween, and finish off a draft of a spooky short story, I look over at the plastic skull decorations on the side table ... and grin.

My Comments: I really enjoy gothic art with a twist of humor, especially when it is executed so flawlessly, and with this sense of dark playfulness. The detail in this piece is amazing - showing exactly how Yorick continues to inspire art into the modern era. Thematically, there is also the juxtaposition of youth and beauty against decay and death.

Or perhaps she is an alien archaeologist investigating the ruins of a human colony in another star system... :)

A great idea - and perhaps the ruins are those of Earth, and she is excavating at a time far in the future.

Her pose shows a certain affection for the skull, and no awkwardness about it.

Amy - Definitely affection. The artist's own title reflects that :)