Images: Scientists with returned sample, and illustration of sample collection. 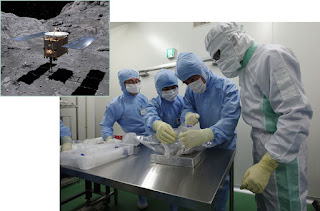 Many thanks to Dr. Rivkin for the interview!

Wow! How cool that you were able to contact Dr. Rivkin and get his perspective on current discoveries in planetary science. I'm glad to hear he believes we are still in the "golden age" of discovery, and that we can do so much exploration right from our own beloved home planet.

I like to think we are still in the golden age, too. There are some amazing findings in the last decade, there there are no signs that it will let up anytime soon.