Some Science in the Writing: Elemental Poetry

Image: Gold as an Element 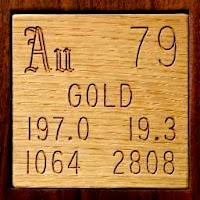 You may recall I conducted an interview with scientist Andrew Rivkin a little while back.  It turns out that this scientist, like many of us, has a not-so-secret artistic bent.  Certainly part of what motivates me to write science fiction is my interest and enthusiasm for the underlying science itself.  And at the same time, being a science fiction fan makes the science more interesting - it makes me wonder what really can or cannot be done, and in what time frame.  Will I live to see humans on Mars?  Workable fusion power?  And where are those flying cars, anyway?

I've strayed a bit off topic, here.  The topic is the intersection of science and art, and the specific example is Andrew Rivkin's music blog, Imperturbable Music.  A place where he usually posts his own music creations, but for the month of April each year is the place where he posts his poem-a-day.  This year he has chosen to write each poem about a chemical element.  Part of the fun is that after the first two poems, he's decided not to put the name of the element in the title, so there is a bit of a guessing game involved.

The rest of the fun is in the poems themselves.  Here is an excerpt from "Metal and Metaphor."

You may think it more metaphor than metal:
shades of blonde and best-sellers,
and high-limit credit cards,
but most of it ends up in junkyards
inside rusting-out beaters.

As I understand it, platinum is used in catalytic converters.  There isn't much of it in one converter, and the energy to remove it from old cars isn't worth the amount of platinum you would get out.  But over time, apparently quite a lot of the stuff is being reallocated from the Earth's crust in rocks to the surface of the Earth in junkyards.  It's quite possible that if and when we get our limitless fusion energy, people will go back and mine the rusting cars for platinum, since it will be easier to find it there than to go mining for it anew.  The idea of the future mining of ancient junkyards is certainly a great idea for a story.

The poet notes here how the word "platinum" is so overused that the first visions it brings up have nothing to do with the element itself.  Platinum albums, platinum blonde, platinum Visa.  Gold is apparently just so passe.  And platinum is headed in that direction - I think titanium is going to be the new cool metal to reference.  Perhaps this underscores part of the narrator's point, that eventually the once highly prized platinum is going to end up in tiny flakes, scattered through the trash of our society.

We are already drinking flakes of gold in our Goldschlager, and we know where that ends up.

More than precious metals can be mined from our dumps.

I for one will never get tired of platinum. Titanium may be lighter and hipper, but nothing creates a better setting for a diamond :-)