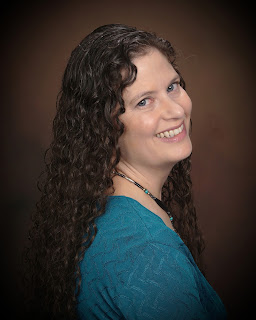 Today I'm pleased to bring you a writer interview with speculative novelist and poet A.L. Kaplan! A. L. Kaplan’s love of books started as a child and sparked a creative imagination. Born on a cold winter morning in scenic northern New Jersey, her stories and poems have been included in several anthologies and magazines. Her novel, Star-touched, was released October 1, 2017. She is the Maryland Writers’ Association’s Chapter/Board liaison and served on the Howard County Chapter board for several years. A. L. is a member of Broad Universe and holds an MFA in sculpture from the Maryland Institute College of Art. When not writing or indulging in her fascination with wolves, A.L. is the props manager for a local theatre. This proud mother of two lives in Maryland with her husband and dog.

1. You have only three minutes to convince a stranger to read your latest work. What do you tell them about your writing, and about yourself, to get them interested?

Eighteen-year old Tatiana is running from her past and her Star-touched powers eight years after a meteor devastates earth’s population. Gifted with the ability to both heal and destroy, Tatiana seeks refuge in a town she once visited. But this civil haven, in a world where society has broken down, is beginning to crumble.

I had no idea that we’d have so many natural disasters or that huge asteroids would be flying so close to earth this year when I wrote Star Touched. It’s rather frightening how many similarities there are to what’s going on now both environmentally and politically. 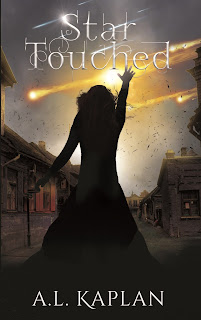 2.  Your spaceship can travel to any world, real or imagined. Where do you go?

I’d love to travel inside my mind and find out what’s going on in there.

3.  What was your favorite book you that read as a child? What have you read recently that you can recommend?
I grew up reading James Herriot, Jack London, Laura Ingalls Wilder, Albert Payson Turhune, and of course J. R. R. Tolkien. Lord of the Rings may have birthed my love of fantasy, but there are three other books I read that were a huge influence: Island of the Blue Dolphins, My Side of the Mountain, and Julie of the Wolves. I guess I have a thing for kids surviving on their own in the wild. My favorite musicals are about orphans as well: Annie and Oliver.

There have been several books I’ve read recently that have been really good. The House on Moss Swamp Road by M J Patrick comes to mind, as does The Fuller’s Apprentice, by Angela Holder, The Enchanted Dagger by Vonnie Winslow Crist, and Dawn Study by Maria V. Snyder. I don’t often read non-fiction, but The Strong Woman Trap: A Feminist Guide for Getting Your Life Back by Sasha Mobley was very enlightening. I could go on, but there is only so much space in your blog.

4.  How do you meet and stay engaged with other writers?
I’m very active in the Maryland Writers’ Association at the state and chapter level. I’m also in a critique group and am a member of Broad Universe. I’ve made some great friends at conventions like the MWA Writing Conference and fan-based cons like Balticon. This year I’ve been invited as a participant at Raven Con in Williamsburg on April 20 – 22, and Balticon in Baltimore, Maryland on Memorial Day weekend. I’m really looking forward to them. Book festival are a great way to meet people as well, and Facebook makes it easy to stay in touch and find out what other writers are up to.

5.  What is a quote that resonates with you - either from yourself or someone else?

“Be who you are.” It’s an important theme in Star Touched. My main character, Tatiana, is afraid to be who she really is. It’s one of the quotes I sign in my books. It’s also on my license plate. (A birthday present from my husband this year.)

6.  Do you have a personal symbol or icon with which you identify?

I don’t know about an icon or symbol, but I do feel a connection to wolves. When I was in high school I had a dream about wolves. The next day I went to the library and started reading. The more I learned, the more I liked. My collection now includes books, art, toys, and a few odd things like a howling cookie jar. Wolves have also inspired several stories, including my short story, Wolf Dawn, which is in the Young Adventurers: Heroes, Explorers, and Swashbucklers anthology.

7.  How do you find good new reads in your genres of choice?

There are several places to find new books. Friends recommendations, perusing the stacks in a bookstore or library, Goodreads, and of course, talking to authors. There’s a lot out there. I also look for those free book days. If I like that first one I’ll by others by the same author.

8.  What is one thing that really scares you?

That would be tornados. I’ve never seen one, but they really freak me out.

9.  Which conferences/book fairs/meetings do you try to never miss each year?

Balticon has always been my go to.

10.  You have a magic wand that can cast only one kind of spell. What does your wand do?

My wand has the ability to cast unlimited heal spells that can also cure illnesses like cancer, AIDS, and depression.

11.  Where can fans find you and your work online?

Image Credits:  All images provided by author and used w permission.
Posted by JA Grier (ee/em/eir) at 11:31 AM

Happy NaPoWriMo! Just stopped by to check for the daily prompts like last year ... Those (Apr 2017) were some of the most enjoyable, wonderful and challenging ones.. loved trying to attempt every one of them!