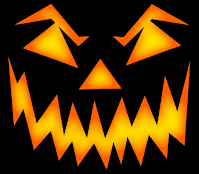 So 2020 is turning out to be a year fraught with it's own kind of horror, and for those of us with a creepy mindset, one of the best ways to take a break from real horrors is to engage with fake ones. In 2017 I did a blog series of 31 Halloween movies in 31 days, and I think the time is right for another round.

The first post of my 2017 movies is here - so if you need even more ideas, go check out that and the posts that follow it.

So here we go!

My theme for these first three movies is merely that they were much better than I had thought they'd be.  Nothing like a "pleasant" surprise.

I originally avoided this movie because I heard there was a subplot related to trauma and mental illness, along with a setting in a sort of '50s insane asylum.  As someone with mental disability and PTSD, I didn't want to be dragged through another ableist slog of a horror film.  But I finally decided to give it a chance, and wow, I'm glad I did.  This movie is a wonderfully bizarre blend of film noir, period piece, steampunk, horror, action, weird, sci-fi, fantasy, manga, thriller, and pretty more.  The special effects, soundtrack, and much of the acting are gritty and great.

Our heroine "Babydoll" sees her father in law murder both her mother and sister, and then he frames Babydoll for these crimes and packs her off to a private institution that still practices lobotomies as a form of "treatment."  We, and Babydoll, overhear him bribe a slimy orderly to see to it that Babydoll is lobotomized almost immediately.  She seems to retreat into a complex fantasy world with multiple levels, imagining that she is working to free herself and other inmates from a human sex-trafficking brothel.

I'm not sure why this movie didn't make a bigger splash, because it seems have a lot to offer.  Perhaps it has to do with the various ways in which 'sucker punch' can be interpreted; maybe it's realizing that the 'fantasy' Babydoll conjures is actually playing out in the 'real' world; or maybe it's the way in which the team members die; or maybe it's the ultimate confirmation that even Babydoll does not escape her fate.

The movie is also disjointed, moving through three levels of perceived reality.  Perhaps it's too triggering for some.  Certainly, I found Babydoll's situation to be agonizing, but I was able to finish the film because it depicts people taking control of their fate in even hopeless circumstances.  In the end, I was captivated by the total weirdness of it all, the honestly gruesome plot, and the fantastic action worlds of the meta-fantasy filled with mechs and monsters.  Sucker Punch is perfectly appropriate Halloween fare, and worth a watch (or rewatch) this season.

Why, oh why, did this film not get all the super kudos?  Yes, the plot is obtuse and sometimes impenetrable, but the filming is amazing, the costumes are perfect, and every single actor has completely bought in and gives their all.  Are the reviewers not genre-savvy?  I see all sorts of criticisms out there about the predictability and lack of surprises and do the reviewers not realize this is a parody and it uses well-known tropes as part of the vehicle for that parody?  Sigh.

Anyway, I loved this thing.  It's ridiculous and beautiful.  If you are not captivated by the scene where Elizabeth and her future husband resort to hand to hand combat as a result of a failed marriage proposal, then I don't know what you want from a movie.  I was doubly sold when a friend who has a squeamish tummy 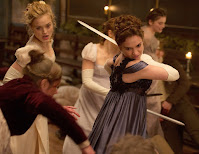 couldn't even make it through the beginning exposition with the paper-pop ups.  She saw all the paper-depicted-gore and turned green.  Then she vetoed the movie on the grounds that it looked disgusting.  Which it is.  It's a zombie movie, right?

This is a seriously excellent zombie flick with dedicated performances.  Some of the landscape scenes are simply haunting.  The fight scenes in gowns are wonderful.  Oh, and the riffs on Austin's work are spot on, and often word for word from the book.  This romp is well worth your time for Halloween.  Enjoy the zombie glory and don't worry too much about the point and you'll have plenty of fun.

I generally enjoy old black and white horror films, the earlier the better.  Film was precious enough and novel enough in the first decade of the 1900's that it was often used for projects of some importance or cultural significance.  By the 1930s, things were already changing, and it was more common to find film used for "less vital" topics that the producers did not imagine would be of interest a hundred years later.

The movie Nosferatu 1922, which I reviewed in my last series here, has consistently captivated those of us who love the vampire genre.  I had not heard similar praise for Vampyr, and given the later 1932 date I thought maybe it just wasn't up to snuff.  So I put off watching it.  That was a mistake since this is an absolute gem, with tons of disturbing imagery and a deliciously foreboding tone. 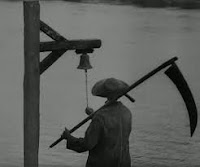 Our hero stumbles upon a family cursed by a vampire.  As the lord of the house is killed to keep him quiet, our hero reads the old man's journal and uncovers the nature of the curse.  The younger daughter of the lord assists him in his searches for the prime vampire, who must be destroyed to free her sister before the sister becomes a vampire, herself.

Along the way is all the great, creepy scenes, and a really very disturbing end for the village doctor, who was in league with the vampire.  I'll mention that only once before have I seen someone offed in this manner, and I thought it was horrifically original.  Nope, here it is all the way back in 1932. 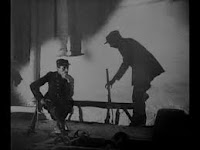 This aged beauty of a film is worth the watch, even with the grainy, blurry texture of the remaining prints.  Definitely put it on your watch list for the season.
Image Credits:  Sucker Punch I own this CD case and also from https://www.awn.com/vfxworld/stitching-together-sucker-punch . PPZ CD case and then studio promo image.  Evil Dead II movie case and action shot from http://www.bookofthedead.ws/website/evil_dead_2_props.html.  CD case for Vampyr images from screen shots.
Posted by JA Grier (ee/em/eir) at 3:30 PM