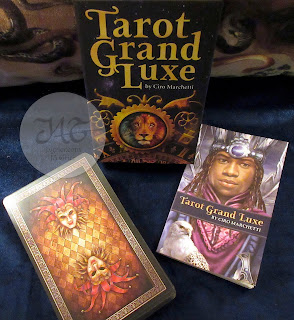 As part of our New Year's revelry, I asked my spouse to help me with a Tarot reading for 2021.  He obliged, and so I have my (pretty awesome) reading for 2021 to share over the next several posts.

Given that I'm a scientist, I'm sure it's no surprise that I do not view Tarot as supernatural.  Rather I view it as a engaging and creative means to uncover some of my own psychology.  Tarot works best for me when I look at a card and consider the implications that I easily accept, and then those I immediately resist.  Also during this time of pandemic, I find myself gravitating to tactile activities that are not computer based.  There's a sort of need for texture, color, and the sound of shuffling cards.  It's very grounding and comforting in a time when so much of the physical world, and the physicality of other people, has been out of reach.

For my 2021 reading I chose my Tarot Grand Luxe deck.  It's my go-to deck for when I want lots of detail, but don't want to work too hard to find the messages.  One of this deck's best aspects is that, unlike SO many other Tarot decks, it includes people with a wide range of skin tones and facial features.  It's a dynamic, vibrant deck that's full of life.  Now if I could only find a deck with a wide range of genders and body types, too, I'd be pretty darn happy ...

This is a gorgeously illustrated Tarot with largely standard themes.  Because the themes and symbols are standard, it makes interpreting the messages more straightforward than some of my more unorthodox decks.  What do I mean by standard themes?  Let's take a look at a comparison of four of my favorite tarot decks.  I've taken the Six of Coins/Pentacles and the Hermit card from each deck.  Check out the image, with helpful arrows and labels!  :) 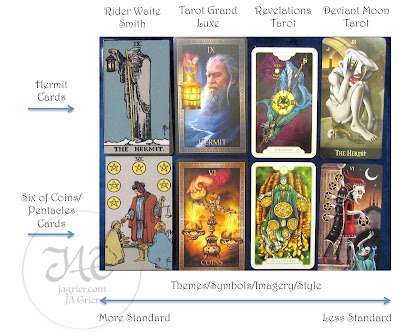 The first deck is the Rider Waite Smith Tarot deck, a variant of the very first decks used for divination published in the early 1900s.  The second deck is the one I've chosen for 2021, Tarot Grande Lux.  As you can see, the first two decks have similar imagery and symbols for both cards.  The Hermit is an old dude with a long white beard, usually carrying a lantern or such and maybe a cane or staff.  The setting is a path or journey.  For the Six of Coins, there is a scale and someone weighing out gold.  It's easy to say, yep, that's a scale and it's being balanced, or that's a lantern and he's looking for something.  I.e. you can get a quick read on the general idea of what you are looking at in the card.

But decks can be a great deal more unorthodox, with imagery and symbols used in new ways, or that are not immediately recognizable.  The last two decks show a progression from weird to weirder.  Revelations Tarot is pretty cool because the cards can be read as they fall, either right-side up or upside down.  I don't usually bother with 'inverted' or 'reversed' readings - if I pull a card and it is upside down, I flip it.  Many people prefer to leave the card inverted, and then interpret the meaning in some way that is reversed to the original meaning of the card.  Revelations Tarot makes that super easy - it's almost like there are two whole decks here, since each card has a top and a bottom image.  However, these images are highly stylized, and combine symbols in unusual ways.  Deviant Moon Tarot is one of my more weird decks, and is perfect when I'm in that headspace.  The images here look nothing like the Rider Waite Smith Tarot, and the moon and tone of the art is vastly different.  So when I'm in a mood for the strange, I'll choose a deck more like this.

Image Credits:  All pix are taken by me of my own Tarot decks, except I have cut in the pictures of the RWS Hermit and six of coins into my image from Wikimedia Commons.