Update: Back in the Saddle, Writing 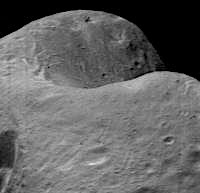 So, it has been almost three months since my last post.  Sad indeed.  This blog has been (and remains) an excellent motivation for me to keep to my writing schedule; a place to post updates, wax poetic about astronomy and science, and as a portal for investigating other's writing, blogs, and articles.  But I had to put my blogs on hold for some holiday issues, family issues, and then health issues.  It is good to be getting back into a regular writing life, and I'm looking forward to finally posting some of the ideas that came to me during my blog hiatus.

I was looking for an inspiring image of a person on a horse riding out to adventure, in keeping with my 'back in the saddle' theme.  Instead, I found something better.  Almost exactly ten years ago (March 22, 2000) the spacecraft NEAR-Shoemaker took this image of the asteroid Eros.  The major feature visible in the image is the 'saddle region'.  On Earth, a 'saddle' is a geologic term for the depression between two mountains or hills.  On Eros, it isn't clear what process was responsible for forming the saddle.  There is an impact crater (5.5 kilometers in diameter) on the other side of the asteroid.  This saddle might have formed by spallation from that event.  Spallation occurs when a shock wave travels through a body and reaches the other side.  As the wave interacts with the free boundary of the surface, material can be forced to break apart and be thrown outwards.  Whatever the origin of the saddle, this prominent feature was chosen as the last resting place for the spacecraft itself.  Almost exactly nine years ago, (February 12, 2001) NEAR was brought to a 4 mph landing right in the saddle.  A position that took it out of contact with Earth forever. 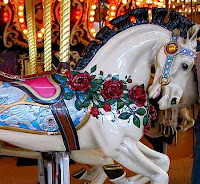 Fortunately my posting regularity doesn't reflect the entirety of my writing regularity.  I did manage to continue to work on my current 'fantasy' or 'out of genre' allegory novel, which is probably within 15K words of first draft.  It's been a good break from the trilogy I'm writing in my standard sci-fi universe.  The trilogy that just won't finish itself.  It makes one wonder, sometimes, if the writing is better modeled by an adventurous ride across the desert, or just going round and round, seeing the same things over and over again.

As an asteroid fan, I very much approve. I'm also reminded of another astronomical saddle, if one with a somewhat tenuous link: The Saddle Road on the Big Island of Hawaii crosses the island between Mauna Loa and Mauna Kea, and is the only way to get access to the observatories on the latter...

Oh, good call. I forgot about the saddle road on the Big Island. Now you have me going through an internal trivia check of all the astronomy-related saddles I can think of ...