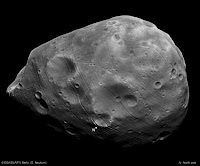 Phobos, the innermost of Mars' small, rocky satellites, has long been a source of inspiration for science fiction writers.  Given that the last two weeks have seen amazing new images from this rocky satellite, I thought I'd write a post highlighting some of this moon's past history in literature, as well as current speculation on its origin.

The European Space Agency's Mars Express mission was launched in June of 2003.  It entered Martian orbit in December of 2003, and since has been chugging away sending back data.  Mars Express has recently entered a new observing campaign, and for the last few weeks has concentrated on acquiring high resolution photos, radar, gravity, and other data of Phobos (also see the Planetary Society's blog posts about Phobos, and the official Mars Express blog now posting about Phobos Flyby 2010).

I have an interest in rocky surfaces, and have been fascinated by the overlapping features revealed in the new images.  Phobos' surface is characterized by a variety of features including: craters, rays, regolith, grooves, boulders, crater chains, albedo differences, and much more.  For those who find Moon-like surfaces boring, I suggest they take a look at these images and try to put together the puzzle of history they represent.

Phobos and Mars share something of a similarity in how they grabbed the attention of the public.  In each case, there was a suggestion by early observers that these bodies showed evidence of the work of another intelligent civilization.  For Mars, it was the suggestion by Percival Lowell that Mars' surface was crossed with 'person'-made canals (confused from Giovanni Schiaparelli's channels, and subsequently shown to be an optical illusion).  The follow up was a furor of Mars stories with aliens in residence.  In the case of Phobos, it was Russian astronomer Samuilovich Shklovsky in 1958 who concluded the body was a hollow alien construct.  A little more than ten years later, his interpretation collapsed when accurate measurements of the satellite's orbit were made.

As with Mars, the subsequent discounting of the need for Martians to explain the observations of Phobos did nothing to change the mindset that made its way into the popular literature.  This is something that can be seen readily by looking at the science fiction stories about Phobos.  Lists abound on the internet, so I won't reprint a list here, but there are some strong themes present.  I find it striking that Phobos is often portrayed as entirely alien made, or the hiding place of an alien artifact as in the stories Phobos the Robot Planet and Century Rain.

But those energetic Earthlings are quite likely to be the first civilization to make use of Phobos.  The satellite features in NASA's new "Flexible Path" strategy for human space flight.

The truth of Phobos' origins and fate are by no means uninteresting, even without the need for Martians.  Its fate is probably going to include being torn apart by Mars' gravity before it falls into the planet.  Phobos' orbit is slowly evolving.  It is growing closer and closer to Mars, and one way or another will eventually crash into the planet's surface.  The other moon of Mars, Deimos, is doing quite the opposite.  Its orbit is slowly evolving so that Deimos is receding from Mars (like our own Moon is receding from Earth).

Reflectance spectra obtained by Viking in the 1980's suggested that Phobos had a composition similar to asteroids in the middle region of the asteroid belt.  Given this and their asteroid-like shapes, it has long been speculated that these moons are captured asteroids.  But new data about their possible compositions, as well as a new understanding of planetary dynamics, makes this theory more problematic.  Dynamicists say it is highly unlikely that two asteroids could be captured and then end up in these orbits.  Recent reflectance spectra of both Phobos and Deimos look more like comet nuclei or the Trojan asteroids of Jupiter.

So new theories for the origin of Phobos continue to be generated.  Perhaps it is not captured at all, but is instead the ejecta from a massive impact on Mars.  Are Phobos and Deimos old remnants of ancient Martian crust that have been subjected to 'space weathering'?  If so, why would they look like comet nuclei?  Or perhaps there were once many satellites of Mars, and these are the only two left.  At this point, there is no definitive answer.

Which once again means that science fiction authors can step in and generate their own possible origin stories.  One of which may turn out to have been right on, some day.

Excellent! I'm a big Phobos and Deimos fan. Their fate thus far has been to only get attention from spacecraft that are mostly designed to look at Mars, other than the ill-fated Phobos 1 and 2.

Some other favorite Phobos links, if I can indulge: Images of Phobos and Mars from the Phobos 2 mission (http://www.strykfoto.org/phobos2.htm), amazing HiRISE images (http://hirise.lpl.arizona.edu/phobos.php), and Phobos and Deimos eclipse (really transit) the Sun, as seen from the rovers (http://marsrovers.jpl.nasa.gov/gallery/press/opportunity/20040311a.html)

Andy - Glad you liked the post. The images of the transits by Phobos and Deimos are very cool. Thanks for the links. Feel free to hotlink them next time, the comment box supports simple HTML.