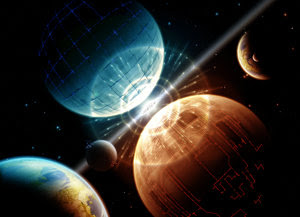 The idea of 'duality' in its many forms has been on my mind lately, and I wanted to share a few thoughts about that here on One Writer's Mind.

But first I'd like to follow up on an idea from my last post. I've been having a little success arranging partnerships with up-and-coming speculative artists (although some might consider that pejorative, since a few of these artists have clearly arrived.) Because of this, I will be able to feature much more art on the blog, and it will be a win-win situation for everyone involved.  We, the writers, will now get to see some work that has thus far not gotten the exposure (I think) it deserves.  And the artists get a little more 'air' time.  I hope you find the art posted on One Writer's Mind to be as inspiring for your imagination and writing as I find it to be for mine.
Back to considering duality - humans are obsessed with it, obviously. Black and white. Yin and Yang. Up and Down. Pro and Con. There are many creation stories that involve the separation of light and dark, order and chaos, or heaven and earth. We seem to have a deep desire to grapple with this concept; the two sides that never meet. And if they do meet, we imagine the result to be catastrophic.

An obvious example from science fiction is 'The Force' with its light and dark sides. And yet much of what Lucas envisioned was built on ancient ideas of an epic hero, an epic struggle. The ultimate expression of duality through the triumph of good over evil. It is one of the oldest stories in The Book.  So how is it that this theme can still compel us? How is it that writers can revisit this theme over and over, and readers do not grow tired of it? How does that relate to the fact that we have built it into our myths from the beginning, and where did it all start?

As a scientist, I can't help but think about matter and antimatter when considering 'duality'. Matter is what we are familiar with in our daily lives. Our protons have a positive charge and our electrons a negative charge. Our universe is composed almost entirely of matter, with only a very little antimatter. There are electrons out there with a positive charge, but they are impossibly rare, and exist for only a sliver of a second. And yet there is no particular reason why our universe had to be made of matter. Antimatter is expected to physically behave exactly like matter. But when our universe formed, there was just a tiny bit more matter than antimatter, and that small asymmetry (the baryon asymmetry) was all it took. Eventually matter 'won out' and our galaxies and such formed from it entirely.

But that does not mean that there is no antimatter in our observable universe. Antimatter is created naturally in high energy events, such as inside a particle accelerator, or around an energetic source like the center of the galaxy. Not much of it is created, and as soon as it is, it runs into nearby regular matter and they both vanish. When matter and antimatter meet, they annihilate one another leaving a flash of gamma ray energy behind. This to me seems like the quintessential meeting of light and dark, with a catastrophic ending. And it is a natural phenomenon occurring throughout the universe, all the time.

And yet, the very existence of two sides can sometimes imply an in between place. A coin has two sides, but without either of them you do not have a coin. I am reminded of what I consider to be one of the first modern science-fiction/fantasy explorations of the duality of human nature - The Strange Case of Dr. Jekyll and Mr. Hyde. The end is indeed a catastrophic disruption, but along the way, the reader must abide with the tension of good and evil existing simultaneously.
I'll venture to say we all know in our hearts that the world is not black and white. We might desire an obvious hero and an obvious villain. Knowing who the bad guys are always makes the path we must take much more clear. But more often then not, the path is grey. Black and white end up being the ends of a continuum, and life is lived in the spaces in between. Most of fiction (and perhaps non-fiction) is really the struggle to find the proper course when the path is not so clear after all.

I'm curious about your thoughts, especially about how writers can and do approach the subject of duality with new perspectives that continue to engage readers.

Image Credit and Information:  "Convergence" used with permission from the artist julian399 via Deviant Art.
My comments:  The detail in this work, as with all of Julian's work, is awesome.  You have to go to the site and see it in the full resolution version to appreciate it fully.  I don't provide that resolution here, and won't for most art I post, to avoid the possibility that someone will take it without permission.
Artist comments: "two artificial entities of pure machinery, Order and Chaos at a death lock trying to converge into one entity... at the distance, celestial inhabitants of the universe watch in awe as they both try to annihilate each other; while other sentient beings racing into the heart of the storm attempt to prevent their gods from obliterating themselves and the very fabric of space and time..."
Posted by JA Grier (ee/em/eir) at 3:00 AM

Interesting subject. There is another aspect to this in Western culture, which is the Edenic story that man and woman were once one and were separated into the sexes/genders (with details depending upon religious conservatism, perhaps). I think there is tension behind this kind of dualism (whole/parts) when it is projected onto a good/evil type of dualism. It might be interesting to think how a single- or multi-gendered species might treat good/evil. If that makes sense. I haven't had any caffeine yet.

Andy - Excellent observation, that our dual gendered nature plays right into other themes of duality. And as you imply, if there is a man/woman, is one gender also tagged as bad/good, or order/chaos? I have both single and multi-gendered species in the sci-fi universe I am developing. I'll mull over how that might impact their philosophy of good/evil, or other dualities. I also have not had any caffeine.