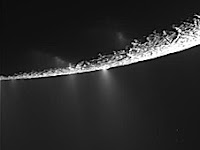 The pictures from Cassini's second flyby of Enceladus are amazing. Plumes were discovered when the spacecraft made its first pass, but this second close up view put the plumes in gorgeous profile. This icy moon has plumes of what are likely to be a combination of gasses and dusty or icy particles. How are these 'ice volcanoes' powered?  No one is quite certain.
Perhaps even more cool, so to speak, is that us planetary folk pretty much think that Saturn's E ring is composed of particles spewed from these plumes - Enceladus is the source of the particles that are replenishing one of the rings of Saturn. 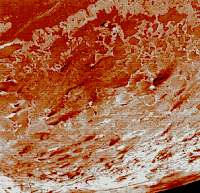 Plumes were originally spotted in the outer solar system on Neptune's moon Triton. The Voyager II spacecraft was swinging by the giant planet in 1989 and captured images of Triton with geysers of gas and dark particles shooting 8 km from the surface. The middle image shows the dark streaks of material down 'wind' from the plumes at each end.

The plumes were thought to resemble the geysers at Yellowstone National Park. (Note image with geyser and startled Buffalo going WTF?) But geysers like Old Faithful are driven by high pressure steam heated by underground geothermal sources. Yellowstone is actually an active volcanic area. This exact process isn't available on a small, cold world like Triton or Enceladus. Where is the heat coming from on a frozen moon to drive these geysers?
Some ideas speculate that there is some source of latent heat within these worlds, perhaps radiogenic elements, although this is unlikely. Another possibility might be tidal heating, an extreme case of which is responsible for the incredible volcanic activity on Jupiter's moon Io. But again, unlikely, since dynamical models would not predict this. Another idea was that of an 'ice greenhouse' where clear stretches of ice would allow the pale sun to penetrate, heat darker ice beneath, and eventually allow pressures to rise to the point that gasses would force outwards. After all, on a world as cold as Triton, nitrogen itself can freeze. And it does not take too much energy to change its state from ice to gas. Still, this model has its own problems. And what of the fact that the plumes on Enceladus are all at the South pole?
From my perspective, this area is ripe for investigation by science fiction. And yet I'm hard pressed to think of a story that makes mention of the plumes, let alone features them. John Varley's novel 'Titan' might have been the sort of novel to have a mention, except it was written in 1979, ten years before the Triton discovery.  Anyone else know of a sci-fi story that features these ... features? Seems like fertile ground for solid scientific speculation, and some great sci-fi ideas.