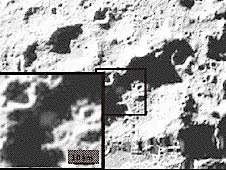 So after decades of a paradigm of a bone-dry Moon, once again we scientists (and sci-fi writers) have to adjust our mindset.  It's one of the reasons I like science, actually; the constant questioning of hypotheses.  But since my own background is largely in lunar science, this one is taking a little getting used to ...

We all 'knew' the Moon was dry.  We looked at the Apollo rocks and saw no evidence for aqueous alteration of the minerals.  I've done work on them myself.  There was trace water detected in some samples, but it was generally attributed to terrestrial contamination.  Years of studying both the samples and orbital data did not create a coherent scenario to change that view.  When water was suspected to have been detected in permanently shadowed regions of polar crater walls - that wasn't too much of a shock.  Perhaps comets had been bringing very small amounts of water to the Moon, and it had trapped in these areas.  But still, we 'knew' there was no substantial water.

But this has all changed now, with LCROSS putting the nail the coffin, so to speak, that was already being built by Chandrayaan.  More than one instrument on board the Indian lunar orbiter Chandrayaan had a positive detection for water.  Reports by scientists at the annual AAS DPS conference caused plenty of discussion; none of us really could agree on what the best models were for 'how much' water, and how the heck it got there.  But LCROSS was on its way, even that week, and by Friday the remains of the Centaur rocket that boosted it there crashed into the surface.  LCROSS flew through the plume (note the small, white cloud at the center of the inset image), and low and behold, detected water.

It wasn't a huge amount, but it was a 'substantial' amount by scientific standards, say two dozen gallons.  This still makes the Moon as dry or dryer than the most parched terrestrial deserts.  But the paradigm shift is quite important.

From my point of view as a scientist, it makes me wonder if our ideas for the origin and evolution of the Moon might not be a tad off (note sarcasm), and need reworking.  None of us know yet what the most likely source of the water might be, or might have been.  Is it being created by ongoing interactions with the solar wind?  Delivered by comets?  Or is it residual from the formation of the Moon?  A combination of these?  Unclear.

For those interested in human exploration of the solar system, finding water on the Moon is wonderful.  Water is useful both for people who want to travel (a fuel source) and to drink so they don't croak.  Is there actually that much water?  We don't know that, yet.

And, of course, for the life-crazed.  I'm not one of these people, who needs to use the 'is or was there life there' motivation to make space exploration interesting.  But for those who have that mindset, finding water anywhere is always a big green flag.

And lastly, most importantly, we as science fiction writers have a whole new view of the Moon to work with.  I tend to write most of my sci-fi with a strong science bent, when possible.  Last year, I would never have written a story with astronauts using water from the Moon for any purpose.  Sounds ludicrous.  Well, that door has just opened.  The new ideas begin to percolate.

How about you?  Does this new science finding spark your muse?  How?

I think this is a wonderful finding, for many of the same reasons you do: it shows how science evolves when presented with new data. The Chandrayaan-1 data was published along with data from Cassini (old, old data but newly calibrated) and Deep Impact (on an Earth swingby to change its course for another comet), so there are actually three independent spacecraft observations in support of one another.

The question now, as you note, is to figure out how this stuff forms. Depending on the source, we might expect to find it on other objects, as well. At least one colleague thinks the Moon moving in and out of Earth's magnetic field has something to do with it, and that the oxygen in the lunar water actually comes from the Earth's atmosphere and was delivered by the Earth's magnetic field!

Hopefully we should be able to figure this stuff out in coming years.

Complex, but a fantastic puzzle. Not that I'm biased, but I strongly feel we need some more targeted lunar sample returns. Then, of course, we'd get samples from the other 'airless' bodies like Mercury and the asteroids, and finally be able to do the comparisons that will really shed light on this (and many other issues).