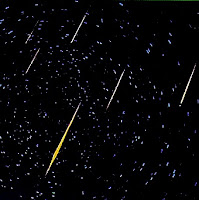 The Leonids are a very famous annual shower of meteorites, having produced some of the most amazing astronomical spectacles on record.  The Earth is always running into small bits of dust and other particles as it travels in its orbit.  These form the phenomena called 'falling stars' which is a complete misnomer.  In any case, at a reasonably dark location, you might see as many as three an hour on any random night of the year.

But in November we get a special treat.  Each year, the Earth's orbit carries it around into a cloud of dust left behind by the comet Temple-Tuttle.  From about November 13 to the 21st or so, these particles rain down into our atmosphere and burn up, causing what we see as a shower of flashing lights (as in the NASA image at right).  The highest intensity (number per hour) of meteors is expected November 17 and 18.  Although it will be best viewed from China or thereabouts, anyone at a relatively dark site will see an increased number of meteors.

And very occasionally, a meteor shower can have a particularly strong peak.  This was predicted to happen during the years 1998 to about 2002 for the Leonids.  In the year 2001, I was outside with two other intrepid observers to try to see if something special might happen.  We were outside all night long, dusk to dawn.  At first, it was easy to see a meteor and call out a number, no worry of calling out the same one as someone else, or missing one in the meantime.  Then it started to get more serious.  The meteors began falling so quickly, we couldn't be certain of overlap or accidentally missing one.  They were even falling in short bursts all at the same time.

One of us intrepid folks posted an email report to friends the next day.  We are all scientists and astronomy geeks, so data for us is entertainment.  Here is an edited version of that email, with my name changed to pen name to protect the innocent in their own minds:


Yo.  Here's the east coast update.  Not nearly as rigorous, though we did have plenty of coyotes to help make up for that.
Observing site:  Groton, Massachusetts
3 am food:  chicken flavored ramen

Bryce alone counted ~800 over the course of the night.  All the following counts are based on those numbers alone for consistency, not corrected to zenith, or anything.  I think we're 5 hours off UT here.  The sky was as dark as it gets in these parts.  We were easily getting to 5th magnitude, though I'm not sure exactly how faint we got.

Bryce had several periods of seeing 50 meteors in 4 minutes between 5 and 5:30, which is up to an average of ~750/hr.  There were some observations of ~10/minute, and times of 4-7 almost simultaneously.

As far as Bryce's sky coverage, I did a test where I faced opposite to Bryce.  I counted 45 in the time Bryce counted 50.  I estimate our overlap was ~50%.  Bryce was probably covering 1/4-1/3 of the sky.  We did not have a clear horizon in all directions.  We were not drinking, except for Bryce's brother :)   So the "real" rates we were seeing probably approached 2000-3000.
Wicked cool.
So although the Leonids are not predicted to have such a huge peak this year, it might be worth the time to check them out.  We still get our predictions wrong, and you never know what you might see.
Nuff for now.  I'll wax poetic about how such sights inspire my writing some other time.
Pax, all
Posted by JA Grier (ee/em/eir) at 8:44 PM

NASA has a web page that lets you estimate the number of meteors you might see where you are: http://leonid.arc.nasa.gov/estimator.html though of course it's a bit late for this link now (maybe it'll be useful tomorrow night, too?)...

I was lucky enough to see the Leonids a few years in the late 90s/early 00s, including on a camping trip in Arizona. They were absolutely remarkable.

Thanks for reading, and for the kudos. That link looks perfect; I didn't know about it, so thanks for sharing. I, for one, plan to head out tonight and see what I can see. Who knows? Good luck if you plan to view.