Profanity in Fiction - To Swear or Not to Swear 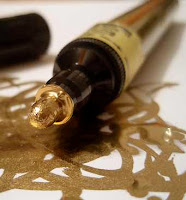 I noted on the NaNoWriMo Forums a thread called "Swearing is Good."  I checked it out, and found that it was mostly frequented by teen writers, some of whom were talking about ways one could use swear words to pad out their word counts.  I found this amusing, partly because I can easily write copious amounts of bad text without adding swearing.  Probably already in my text, as it is.

Anyway, I read the thread because I've always been interested in how writers (and readers) of fiction view the inclusion of 'touchy' words and themes, such as swearing, sex, torture, and more.  Being a sci-fi/fantasy writer and fan, I enjoy reading works where these things are handled well, and add depth, drama, and realism to the story.

I took a look around the net and found a few other things that caught my eye.  One was a blog post from January of this year entitled Profound or Profane? which includes an Ernest Hemingway quote I have always liked:

I've tried to reduce profanity but I reduced so much profanity when writing the book that I'm afraid not much could come out. Perhaps we will have to consider it simply as a profane book and hope that the next book will be less profane or perhaps more sacred.

In some ways, this encapsulates my view on the subject.  I've always seen my job as a fiction writer as a recorder of what my characters say and do.  As the writer, I naturally have some power over what I report, and how accurately.  I don't usually 'ask' them to swear, they do that or not depending on their personalities.  Occasionally, I'll force the issue one way or another to make a specific point in the story, but I don't have to do that very often.  Some stories I write simply have a lot of swearing, others have none.  There are times when you can't get rid of the profanity without simply ditching the story as a whole, and there is no point to that.  (Note post from Grammar Girl discussing attempts to remove or replace swears.)  Everyone is different, and some audiences want their stories with that kind of edge.  And after all, most mature readers have eclectic tastes, so at times they want such writing, and other times they choose something else.