Well it had been my plan to do a post a day in October about my favorite movies for this time of year.  But I'm running late, so I'm going to do a catch-up post or three, starting now.

For whatever reason each of the following films strikes a chord with me that puts me in the Halloween mood.  Often it isn't raw scares or deep terror that appeal to me this time of year.  Rather I'm drawn to that uncomfortable juxtaposition of humor and horror.  I'll tell you what makes good watching (and maybe what doesn't) as far as my personal taste, and why.  Okay let's dive in!

NOTE - Thar be SPOILERS ahead, matey.

The "first movie to watch to get into the Halloween spirit" slot has, for me, been taken over by What We Do in the Shadows (2015).  I adore good vampire movies in general, and this one is nearly perfect.  It's a fantastic little mock-u-mentary about four vampires trying to deal with modern life, or death, as it were.

The movie is gory, funny, surprising, and occasionally appalling (like when we witness a vampire kill a happy young woman, and somehow the scene is played for laughs as blood spews everywhere.)  The scenes showing the vampires' interactions with the local werewolf community are some of my favorites.  The constant references to a rival vampire known as "The Beast" are always accompanied by flashes to old-time pictures of monsters overlain with a haunting musical cue.  It lets you know you will be meeting "The Beast" sometime soon ... The movie offers that perfect feeling of creepy fun that makes me think of Halloween, and so here it is in my "first to watch in October" position. 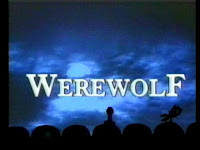 It seems only fair to watch a werewolf flick next, as vampires and werewolves are so often cast in conflict with one another.  I had a vague memory that The Howling (1981), from deep in my youth, was a reasonably fun romp.  So I rewatched it.  Well, it is actually boring.  There are no real scares, because the characters do not draw us in.  One simply doesn't care what happens to them. 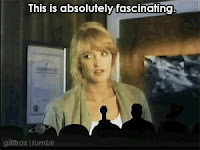 At the worst, the movie just gets those werewolf-like hackles up over the treatment of women.  It's a long slog through watching the main character get attacked, nearly shot, harassed, cheated on by her husband, and then struck in the face by said husband.  Then she gets turned into a werewolf that looks like a teddy bear.  There is nothing here to keep the viewer engaged, and too much taking you out of the "story" such as it is.  It takes about 8 minutes in one scene just to watch someone transform.  Yawn.  Do not bother with this movie.  It may bring back a bit of nostalgia for some of those early 80's horror flicks (which I generally love), but there are no good Halloween feels here.

Instead, watch the MST3K version (1998) of Werewolf (1996)!  Now, you may say that Werewolf is also a bad movie, so what's the difference?  This is true.  Werewolf is painfully bad, and does contain useless scenes where the female character gets harassed.  It has terrible "special effects" if you can use that term here, and a myriad of other filming problems.  But as recompense, you can listen to the MST3K guys tear the movie apart.  This is a flick that has some bizarre charm - including an Estevez brother in an inexplicable role (where he just sort of stares around open-mouthed a lot), people getting turned into werewolves by an ancient skeleton, and some absolutely hysterical setups (like a werewolf driving a car.)

Neither Werewolf nor The Howling work as movies.  But good moments are to be had by watching the unexpectedly entertaining Werewolf, as the MST3K crew makes sure you don't miss one laughable moment.

I am a huge fan of stop-motion animation (and animation in general), so it's not surprising I have such films on my Halloween list.  I'm also a fan of well-done musicals.  Corpse Bride is one of my absolute favorites, flawlessly combining animation and song.  The animation is dazzling, and the color contrasts between the worlds of the living and the dead are used to great effect.  I'm not a fan of Bonham-Carter's singing voice, but it works just fine here.  And otherwise her voice acting gives the titular bride Emily a deep charm and pathos.  The rest of the musical numbers are entertaining and either help establish character motivations or move the plot forward.  Only the "Remains of the Day" tune goes on a bit too long for me. 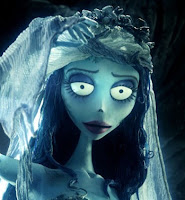 The drab world of the living is almost portrayed as a place you'd want to leave as soon as possible.  Restrictions and expectations abound as the inhabitants negotiate their convoluted class structure rules.  But the "upstairs" world is still given a feeling of hope through symbols like the blue "butterfly" as well as the sweetness of the lead character's betrothed, Victoria.  Victor and Victoria quickly fall in love, and while Victor's bumbling gets a little repetitive, he and Victoria both have their moments of courage that have you rooting for them.

The underworld by contrast is painted as a constant party, filled with laughter and games played by its slowly decaying inhabitants.  "Downstairs" is an egalitarian world where death has made equals of all.  There are skeletons, spiders, maggots, dark magic, and poisonous brews to give it a nice macabre feeling.  In spite of all this, the underworld has a sense of unfinished business.  Like people would move on to whatever comes next if they could.  Emily herself cannot find peace until she comes to terms with all she lost in life.

The movie is fun, macabre, creepy, and entirely engaging.  But really I'm just in love with the puppet Emily.  I had the chance to see her "in real life" at a touring exhibition of Burton's work.  She is actually quite stunning.  The juxtaposition of her stellar beauty against her gruesome decay (causing constant cognitive dissonance) is a big part of what makes this movie a Halloween favorite for me.

Greetings from the UK. It's my granddaughter's birthday on Halloween!