Well movie lovers, we have come to the end of the list!  Thirty-one movies for the thirty-one days of October!  More than enough to keep us all busy for this season and no doubt some years to come.  I thought I'd finish up with a few movies that are my kind of sheer Halloween fun.

As always, beware the SPOILERS below!

My love of all things stop-motion means I was already primed to love this claymation spoof of lycanthropic horror flicks.  If you've seen the short films starring the inventor Wallace and his loyal and clever dog Gromit, then you know the kind of humor that awaits you in this full length movie.

Wallace and Gromit appear to be the only means of pest control for a small town of dedicated vegetable lovers.  Self-proclaimed "simple folk," all the townspeople each dream that they might win the annual giant vegetable competition, and be awarded the golden carrot.  It's a dream Gromit shares, as he tucks in his giant cucumber each night.  "Pesto" pest control has the virtue of being humane, but this means that the house of W and G has now become home to what appear to be a hundred rambunctious rabbits.  This can't end well.

W gets the idea that to stop the rabbit pest problem he can brainwash the rabbits, that way they will no longer desire produce, and the town's competition will be saved.  W hooks himself up to a machine with him at one end and bunnies on the other.  Of course the experiment goes awry, and one rabbit named "Hutch" becomes rather much more than just a simple bunny.

All this is a great setup for an amazing romp through the limits of clay animation, and more.  The characters, like the clergyman, are engaging and fun.  The horror tropes are exactly as one might expect for a werewolf horror movie, except it's all surrounding a wererabbit instead.  The Clergyman makes a plea for repentance, saying it's the town's unnatural giant vegetables that have brought this curse down on them.  It is he that supplies the bad guy with golden bullets (24 "carrot") to kill the rampaging beast.  Meanwhile the hostess of the competition just wants everything to end humanely.  W and G come to the rescue and, well, you better just go watch the movie for the punchline because for once I'm not putting it here.

This may be the only really G rated movie on my list, because even Snow White or The Wizard of Oz are scarier than this.  But it is all done with such humor, insight, and perfect horror-trope jokes that it never misses a beat.  A definite must for Halloween viewing fun!

One of the greatest horror movie spoofs of all time, Young Frankenstein takes on the time honored Frankenstein's monster trope and takes it to the limit of comedic genius.  This movie has aged so well one could imagine it being made exactly like this today.  It gains much from being in black and white, just like the original movies it is ripping on. 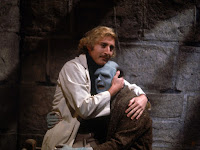 First of all we encounter Dr. Frederick Frankenstein, who does not believe any of that shlock about his grandfather trying to raise the dead.  Or does he?  After inheriting the castle, the young doctor can't resist playing around with the old man's notes and seeing what transpires.  It's clear from the beginning, watching him accidentally stab himself in the leg with a scalpel, that Fred is not entirely sane.

We meet his fiance Elizabeth, who cares more for her fine dresses than for Fred.  We meet Igor, who (in one of my very favorite scenes) tries to eat Elizabeth's fox stole.  We meet the assistant Inga, who becomes Fred's new love interest, and turns out to be surprisingly handy around the lab.  We also meet the over the top housekeeper Frau Blücher, whose name causes horses to whinny in fear throughout the movie.  Not to mention Inspector Kemp, who is hoping the new tenants of the castle aren't going to be raising any monsters.  A bit late for that.

In fact the new monster (created with an "Abby Normal" brain)  can sing and dance, and is generally a pretty nice guy until fire is involved.  He gets startled and rampages, encountering scenes from the first two major Frankenstein movies, and dealing with them in  his own fashion.  Eventually lured back to the lab, the monster and Fred have a bit of a mind meld that allows the monster to gain a measure of Fred's intellect.  This and the monster's rather overcharged libido attract Elizabeth's attention, and they eventually marry.  Fred ends up with Inga, and they get to enjoy the effects of the mind melt where Fred has gained some of the monster's rampant libido.

The Addams Family is one of my favorite Halloween movies, so it takes the position of number thirty-one on the Halloween list.  The plot is totally unimportant here.  What makes the film are the amazing characters, well acted and steeped in a fantastic environment.  I find this movie even more entertaining than the original series.

The couple of Gomez and Morticia are priceless.  Deeply in love in a totally creepy way (having met a funeral where Gomez was still a suspect for the murder) they are equally endearing and unsettling.  While Pugsley isn't given much of a part to work with, the character of Wednesday is fantastically, strangely goth and she plays it perfectly straight.  Include the freakish Fester who finds himself oddly compelled by the weird dynamic, and all is nearly complete.  Of course there is a disembodied hand called Thing, and some other key players to round it all out.

It is all so over the top that it shouldn't work, but I find it does.  The children playing in a lightning storm with a huge metal antenna, Wednesday trying to electrocute Pugsley to find out if there is a God, Morticia clipping the blooms off of roses and keeping the stems, Gomez driving golf balls into the neighbor's house, Morticia leading Fester through the family graveyard to help him understand the meaning of faith and unity ... it's all just too much fun.  So if you want some extra weird and wonderful movie viewing for Halloween, work this one into your schedule.