It's a four-movie post today in order to get me almost all caught up.  I decided today's theme would be zombies!  Of course there are about a ten thousand zombie-related movies, so choosing just a four for one post was a daunting task.  The questions I asked myself were many.  Which seem the most Halloweeny?  Which are particularly fun or classic examples of the genre?  Which bear repeat viewings?  I'm sure my list will vary widely from yours, but below are those that for me stand out as either so classic, fun, bizarre, goofy, or even genuinely scary that I had to include them.

Note - Many SPOILERS below.  So, so many.

My choice for "classic zombie movie" is Night of the Living Dead.  There are a bevy of "Night of Whatever" movies or "Day of the Whatever" or "Dead Whatever" movies, so it's almost impossible to keep track.  Still, this is the one I think establishes so much of the genre, and is still a really excellent creepy Halloween movie today.

This is a grim film from beginning to end, with no light humor to break things up.  It takes itself seriously, even though the scenes where people are eating entrails are not particularly realistic.  Still, they are pretty ooky and gory, even in black and white (definitely see the black and white version).  The zombies come from everywhere in this film, both inside and outside.  As the people in the house get killed, they get converted and start munching.  People do the now-canonical freak-out thing where they threaten each other.  When the ending comes, it is a total shock, watching how and why the hero loses.  The movie comes off as both horror and tragedy, and today, what with our sensibilities so shifted, it also has moments of unintentional humor.  For lots of creepy shambling zombie goodness, it doesn't get much better.  All together it makes for good Halloweeny viewing. 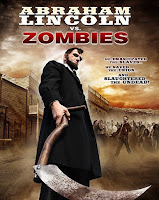 This is just as good as a campy 'B' movie can get. Abe runs around through the whole thing with a specially "modified" scythe.  Abe broke the handle in half when he was a boy, and now wields it much like a giant switchblade, flicking it open and closed with ease. There are a plethora of wonderful scenes in slow motion, with fog or smoke blowing around and zombie heads flying. When the zombie heads are not flying, that's because the zombies are being bashed to "death" with rakes, hoes, sticks, and anything else that's lying around.

The movie works entirely because of the Abe Lincoln performance.  The actor plays it completely straight, no side chuckles or winks.  Whenever he is on the screen the movie is interesting, and there is no scene he does not steal.  Even when the movie has Abe meeting his former lover, now turned prostitute, it is presented as a serious scene.  The juxtaposition with the plot and all the zombie bashing is utter hilarity.

There are some regrettably slow paced sections that could easily have been edited out, but they are good spots to go get more popcorn.  The movie should also have ended ten minutes before it did, that is, right after Abe gives a very convincing Gettysburg Address.  This might even have been moving if you hadn't already heard Abe using these and other rather more ludicrous lines during zombie combat, (i.e. "Emancipate this!" - Yes. This is said.)  Overall, it's fantastic Halloween zombie fun.

It took me a long time to come to the Evil Dead series, and I still haven't seen much of it.  But it is obvious even from one viewing that Evil Dead II: Dead by Dawn is amazing zombie spoof film making.  Some might argue that these creatures are possessed corpses, not zombies.  But since they do all the zombie trope things, and look like zombies, and no doubt smell like zombies, this film firmly fits the zombie category in my mind.

I already mentioned I like stop motion animation, and there is some wonderful and goofy animation here.  But the scene that sticks with me isn't filled with animation at all, it is our hero Ash struggling with his own possessed hand.  Before he manages to sever it from his body, the hand smashes plates over his head, beats him in the face, and even flips his whole body over.  It is an amazing bit of slapstick acting.

There certainly isn't much of a plot - just a scaffold to get us from one zombie gore fest to another.  We eventually find Ash heavily armed with both a buzz saw and a sawed off shotgun, to which he says "Groovy" and continues his struggle with the forces of evil.  The ending is only there to tell us that there is going to be a sequel.  But the movie works because all the scenes are over the top fun.  For some trope-making zombie Halloween cinema, this is good popcorn viewing.

Remember I said SPOILERS?  You have to go watch this one and then come back here.  Right?  Good. 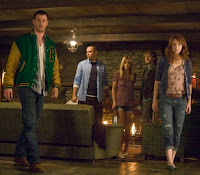 The Cabin in the Woods is a really stellar Halloween flick that starts with zombie attacks and ends up with more monsters than you can imagine.  The movie opens as your nominal horror film with a group of young friends headed into the woods for a fun weekend off the grid.  What's weird, though, is that the movie keeps bringing the viewer back to shots of the interior of some kind of high-tech facility, where people are milling about doing what might seem like mundane government jobs.  This juxtaposition of scenes makes for great viewing, even on repeat viewings when we know what is happening. 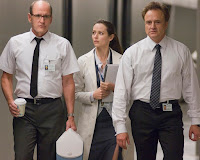 As the movie goes forward we see that the workers in the facility are manipulating the young people, and eventually lead them to unleash a horror on themselves.  We go through some standard movie zombie attacks, but they are handled really well, with good pacing.  And they are obviously designed to be so cliche that we are trapped between laughing and grossing out.  The scenes of the workers reacting with a mix of reverence and nonchalance to the death of the first student is super entertaining creepiness.  Some of the workers are just disgusting with their disregard for life, going so far as to bet on the means whereby the students will meet their end, and so you end up hoping they get some kind of comeuppance.

We begin to understand that all this horror is some kind of rite, with the workers making sure that the young people all die, and even in the "right" order.  The workers are gleeful when it seems that they have succeeded.  Alas for the workers, one of the students (the Fool) has resisted their manipulations through copious use of pot.  He and another of the students (the Virgin) find their way into the facility, which is built below the cabin.  For me this is the best and most Halloweeny part of the movie, as the students find imprisoned in the facility all kinds of horror movie monsters, from ghosts and werewolves to an obvious "Hellraiser" ripoff.  In an attempt to escape the workers trying to hunt them down, the students unleash all the monsters in an amazing scene of gory mayhem.

The students finally learn that the rite is actually a sacrifice to appease the old gods, who will destroy all of humanity if the ritual fails.  When she is put in a position to complete the rite (i.e. kill the Fool), the Virgin eventually declines, and she and her friend share some pot as the old gods come forth to finish off humanity.  I sure wish this last bit had been given some more time on film.  I wanted to see more of the old gods than just a giant hand.  Still, it all comes together fantastically, and the scenes with all the monsters munching through the workers is worth many Halloween viewings.