So much catch up to do ... so onward with the Halloween viewing!  We've been through vampire and zombie themes, as well as some other fun tropes like the "Belle Dames sans Merci."  So it's time to take a side-step into that oh, so beloved realm of horror musicals.  What I list here are more than just movies, they were also stage performances that became iconic phenomena.  So dive in and see if you agree that these make fine comic and/or creepy Halloween viewing.

As always, SPOILERS!  So watch first, then read. 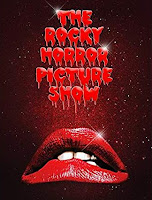 This is a true horror musical phenomenon.  Both a movie and a stage performance, Rocky Horror has been engaging people at midnight movie showings for decades.  It began as an onstage musical called The Rocky Horror Show in 1973, with Tim Curry playing the lead as the mad scientist Frank-n-Furter who creates "Rocky" - his vision of a perfect man.  Just two years later it was adapted into a film, fortunately with Curry back in his role.  It caught on as a cult classic almost immediately, with viewers getting into the act with props and dancing.  The movie has had the longest running release in film history. 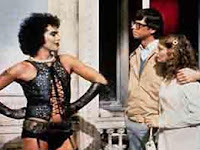 Taken on it's own, it really isn't gripping viewing.  The pace is erratic, and at times you really just want to get on with the story (such as it is).  Fortunately Tim Curry is his usual fantastic self, and carries one scene after another.  He plays his character with gusto - seductive one minute and threatening the next.  There really isn't too much horror, just abject weirdness, although Frank the scientist does kill another character with what looks like an ice pick and then serves him for dinner.  Some of the songs are easily forgotten, while others are impossible-to-shake ear worms.

What makes the experience is the zaniness and mayhem of it all.  Frank gets into almost everyone's bed at some point, and the lead characters of Janet and Brad play it wonderfully straight.  If you can manage to follow the plot, you find out that Frank and his estate staff are actually from another planet.  Frank is executed at the end since "his mission has failed" although we never find out what his mission was.  I can't say the movie needs to be viewed every Halloween, but certainly every few years or so it needs to be brought out and enjoyed for the unbridled chaos it lends to the season.

The Little Shop of Horrors started in 1960 as a black and white film potentially based on any number of books or stories.  I recall seeing it as a kid and enjoying the old-timey creepiness of it, especially the grim ending.  In the 1960 movie, and later in the 1982 stage performance, the ending has the heads of all the plant's victims budding from the plant and opening up like flowers.  This includes the head of the protagonist, who gets eaten along with everyone else in the film.

So I wasn't sure I'd like the campy, colorful, happier version of the film created in 1986.  Even the director Frank Oz wanted to keep the dark ending, but was defeated by pre-screenings where the viewers simply hated that the protagonist and his girlfriend get eaten.  Yet even changed to be more "digestible" this movie has won me over as perfect Halloween fare.

The movie has great music, fun performances, and enough horror to keep the viewer always off kilter.  For fun you have the hero singing lines like.  "I have so many strong reservations.  Shall I go and perform mutilations?"  Steve Martin as the abusive and torture-loving dentist is inspired casting, especially with a cameo by masochistic patient Bill Murray (there are a lot of cameos in this).  The three-woman "Greek Chorus" is fantastic, and some of their numbers are total sing-alongs, they are so catchy.

The plant itself is much of the joy of the film.  With Oz as the director, it is no surprise that the plant is a puppet (many puppets, actually.)  "Audrey II" grows from small to large as the movie progresses.  By the end it's really an excellent monster, singing, demanding to be fed all the time, and way too lifelike.  (Actually, the stage version of the plant is even more impressive, busting out of the stage at the end and threatening to eat the audience.)  The voice of the plant is both crooning and cruel in turns, and it really works as another character.

So definitely keep this movie in your Halloween rotation as campy horror that won't quit, and be prepared to find yourself humming the soundtrack for the next week.

Although there have been stories, films, and productions that came both before and after, the version of this tale that fits my Halloween list is the movie that captures the 1982 musical stage performance.  This is the one with Angela Lansbury and George Hearn.  If you want to be truly entertained with a monstrous story told through mesmerizing music, this is the one to go for.  Wow. 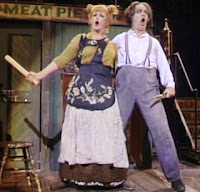 So a serial killer (Todd) and a pie maker (Lovett) team up and start baking people into meat pies.  You can make a "serious" musical out of this?  Yep.  It works because around this gory concept is a convincing and talented cast of characters living out a tragic story. 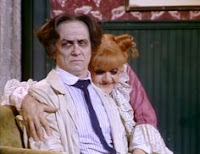 The deranged Todd was once Benjamin Barker, a man sent off to an Australian prison by a judge leering after Todd's wife, Lucy.  With the help of Anthony, a joyful and happy young man, Todd returns to London.  He has nothing but revenge on his mind from the very first.  You can see Todd is given plenty of moments where he could have made a different choice and changed his path, like when honest Anthony offers him his friendship.  Todd shakes hands, but has no intention of ever seeing Anthony again.  Indeed, it's not much later that Todd and Lovett talk about slitting Anthony's throat if that suits their purposes.  Hearn can act and Hearn can sing - haunting, funny, and everything in between.  His performance as Todd is chilling, and almost, almost has pathos.  And then he will do something horrific and you remember what he is allowing himself to become.  To be.

Ms. Lovett is lonely, greedy, and full of ideas.  She and Todd use and manipulate one another throughout their bizarre partnership, but it is Lovett who is holding information back from Todd, not the reverse.  They both live in different fantasies of their own making, but again Lovett's is the most wretchedly off-base, as she dreams herself to be the warm, maternal figure to young Toby, and the doting wife figure to Todd.  She is so invested in Todd that when Toby starts to figure out what is going on, she realizes she will have to arrange to have Todd kill him.  So much for motherhood.  Lansbury's performance is remarkable - alternately bouncing and bloodthirsty.

The Burton film has it's moments, but for pure performance gold, for both acting and singing, this version is superior.  The voices are stellar, especially from the supporting choral cast, who shine in the "narrative" numbers where they carry the story along.  The last number, where most of them are dead and with their throats still bloody, is creepy in the extreme.  All in all, a perfect choice for Halloween musical listening and viewing!