Since I've included a number of fantasy films on my list, dark and otherwise, I've decided it's time to dip into the nexus of horror and science fiction.  So for today I have three sci-fi films that have something "good" to offer my Halloween movie list.  So let us march forward with the sci-fi movie fest!

The modern remake of the old classic movie is a fantastic decent into monster madness.  Don't be fooled by the seemingly silly idea of a fly-man, because this is a truly gripping, gross, and gory horror classic.  The special effects are still effective today, and the love story serves to help drive the plot forward, rather than being superfluous as is the case with so much horror.

The performances by our protagonists Seth and Veronica are excellent, with Veronica acting in ways that make sense to us as Seth slowly undergoes his terrifying and inexplicable transformation.  Seth is of course the canonical brilliant but eccentric scientist who has created a means of teleportation via pods.  He accidentally transports himself along with a fly, and he and it get their DNA mixed together.  As the days go by, Veronica sees Seth at first seem more healthy and alive than ever, but soon he begins to degenerate.  It is the way this degeneration is handled that brings us some of the great horror in the film.  Seth's body (and mind) fall to pieces.  He is so gruesome by the end of the film that it is almost a relief to see the actual fly emerge from what is left of his body.

With good pacing and some serious social undertones about sex and more, this is a nail-biter of a film that's worth a place on anybody's seasonal viewing list.

A dark comedy with wacky plot and even whackier characters, Mars Attacks is a wild romp of a "B" sci-fi horror homage.  Pretty much everybody dies in this ray-gun filled farce, which isn't a problem since many of the characters are so stereotypical they feel more like cut-outs than people. 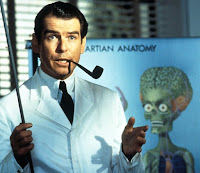 So the Martians have arrived, and the world waits to see what this means for humanity.  We are introduced to our unbelievably star-studded cast, who are going about their various lives (including the President and his family, casino staff, scientists, reporters, and more).  It does not take long for the brain-headed Martians to reveal their intentions - complete annihilation of all sentient life on Earth.  They wipe out the US congress, and then move on to other nations, pretending to be interested in peace.  Eventually they just start destroying stuff rampantly and conducting experiments on hapless captured humans.  There is no hope until it is discovered that one piece of rather terrible music will make the Martians die gruesomely.  The Earth is saved, although most of our cast has been vaporized, or had their heads removed, or been crushed by falling lighting fixtures.

Expect a cameo from just about everybody in this film.  There are so many characters (some of which don't last very long) that there's space for a lot of names, like Jack Nicholson, Glenn Close, Annette Bening, Pierce Brosnan, Danny DeVito, Martin Short, Sarah Jessica Parker, Michael J. Fox, Rod Steiger, Natalie Portman, and even Tom Jones as Tom Jones.  The movie makes no apologies as it irreverently brings the "B" sci-fi movie of the past into the CGI of the "present."  It is just too bad that in the end the stop motion Burton wanted for this film was too expensive, but the Martians are still fun to watch, in spite of that.

Well, I couldn't pass up the opportunity, especially on a sci-fi horror list, to put down my number one scariest flick of all.  Alien is still the freakiest thing I've ever seen, and the xenomorph is one of the best creepy life-forms.  Even after all this time, Alien feels relevant and even fresh.  The suspenseful pacing is still effective, and the horror scenes remain horrific as the crew of the Nostromo get picked off one by one until just Signorney Weaver and the cat are left.  (And thank God for that, I was really hoping the cat would make it ...)

Even the commercial for this movie was scary, carrying its now iconic tagline "In space, no one can hear you scream."  Geiger's artistic style and vision create an environment that is both organic and mechanical, fusing odd elements to generate an unsettled feeling.  And the alien?  The monster first grabs you on the face, invades your guts, and then (immortalized in the unforgettable "busting out" scene) the creature explodes out your innards to start its new life.  Who even knows what the thing is eating as it grows in size to seven feet high in the matter days.  Don't cut it, cause it's blood is acid and could punch a hole through the hull and vent your craft into space.  Just for grossness, it also drools goo and has two sets of jaws.

So if you haven't seen this one in a while, break it out and leave the lights on if necessary.  It makes for perfect viewing at Halloween or anytime you need to remember what a genuinely scary movie feels like.  Keep the cat close by.