I'm behind again, but actually I'm thinking this three-movies-to-a-post thing is working out well, so I'm just going to go with it.  Besides, this way I can continue to do posts with all three movies around a theme.  So now it's time to focus on my favorite sort of paranormal-type horror creature, the vampire!

I tend to prefer my vampires to be seen for what they are - blood-sucking demons of the night.  That does not mean they can't be sympathetic, even romantic.  But the "reality" needs to be there in some fashion for me to take interest.  It'll be no surprise then that Twilight does not make my Halloween list.  But neither does Bram Stoker's Dracula (1992).  That's a gorgeous picture, but for some reason that movie just does not work for me.  I'm not drawn to that Dracula, who is so over the top he's campy.  The movie isn't bad enough to be so-bad-it's-good, and there are too many other actually intentionally campy vampire flicks to watch instead, if that's what you are looking for (like the already listed What We Do in the Shadows).  It was really tough, but after much consideration, I picked the following three vampire movies that I think cover a lot of ground for good Halloween-vampire-viewing.

There are a lot of old vampire movies, but this one is certainly the iconic vampire-as-malevolent-demon, whose influence is felt in every subsequent treatment of the subject.  The film itself, of course, is amazing for any number of reasons, like the use of light and shadow.  It is basically the story of Dracula, with a few adjustments.

When our hero Hutter first travels to the Count Orlok's lands, he is naive and jolly, thinking always of his wife and the coin he's going to make with this major sale.  Watching him come to terms with what is really happening in the castle is excellent horror.  After the sale, the vampire has himself, a lot of dirt, and hundreds of rats all boxed up and shipped off to his new home.  The scenes on the ship are the most disturbing, with sailors dropping off one by one, and no chance for any escape.  The rats as plague symbols are a nice touch, and the townspeople do believe that the plague is upon them.  People keep dying, and almost no one knows who is truly to blame.  In the end, well, it is up to the heroine Ellen to make the ultimate sacrifice to rid the world of this evil.

It's is a fine Halloween movie, and might really be the way to start off the season, depending our your tastes.  I have it here holding the place for the old, classic terrors of the genre.

I have mentioned before my love of 80's horror.  In that category, I don't think it gets any better than Fright Night.  There are vampires, good performances, comic elements, and a nice, creepy buildup to a scary and satisfying finish.  You might say, well, isn't that the same for Lost Boys, too?  Well, I had to make a choice for my 80's vampire category, and unlike Charley in Fright Night, the character of Michael simply has no charisma.  The Lost Boys soundtrack is great, but it can't make you care for the characters if they just don't otherwise appeal. 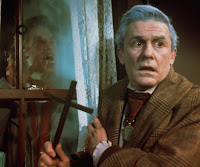 You get far more personally invested in the characters of Fright Night.  Good-natured Charley, his strange friend "Evil," and his girl-next-door love interest Amy are all pretty stereotypical, and yet each is played to sincere perfection.  The most compelling character, however, is the washed-up, horror-host-has-been of Peter Vincent.  It is really Peter's journey of finding his faith in himself, and in his own strength, that makes the film so engaging.  Add in vampire Jerry, who is both unremittingly evil and yet shows momentary glimpses of the human he once was (like when Jerry tells Charley that Jerry is going to give him a choice to keep quiet, and implies that Jerry himself had had the choice to become a vampire made for him.)

I think the film makes for a perfect Halloweeny offering.  I have Fright Night here holding the place for the "modern" vampire movie, which includes a bit of camp and comedy along with solid scares, and a good-guys triumph kind of ending.

I thought hard about what movie I wanted to be my sort of "post-modern" cerebral vampire flick.  There were a few contenders (say like Only Lovers Left Alive), but I wanted to pick something I thought might stand up to repeat Halloween viewings, and at the same time highlight the complex but ultimately nasty nature of vampires.  Let Me In contains so very much of interest to unpack.  I think the most telling aspect of the film is viewed through the trope of the "vampire henchman."  It is through this lens that we understand Abby's deep brutality, and the depths of her feral nature. 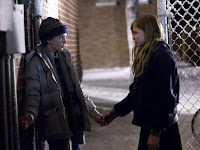 The idea of a vampire and their loyal followers is well worn, starting with Dracula's follower Renfield.  For Nosferatu there was Knock.  For Jerry there was Billy Cole.  For Abby in Let Me In, there is Thomas, a man who by day poses as her father, but by night kills people and brings their blood back to Abby.

As Thomas methodically goes through the motions of killing and collecting blood, he shows little emotion other than weariness.  He admits to Abby that he is getting careless, perhaps on purpose, because part of him wants to be caught.  It becomes clear that he does this work only because he has deep feelings for Abby, to the point that when he does get caught, he burns his face off with acid so the police cannot use him as a trail back to her.  His last act is to offer her his blood.  Abby takes the injured man up on the offer, allowing him to suffer enough blood loss that he tumbles unconscious from a window and dies.

Enter the neighbor boy Owen.  Isolated and bullied, he is highly vulnerable and easy to manipulate.  Abby appears to be genuinely fond of Owen, but more, she desperately needs him.  Old photos show Abby with a young Thomas, and the implications are that she groomed him from childhood to be her helper.  Behaviors repeat in this movie (like bullies creating more bullies) letting the viewer know that this "creating a henchman" is another repeating pattern.  By plan or by mere circumstance, she slowly enures Owen to the sight of blood and violence, to the point of him allowing her to kill someone right in front of him.  This culminates when she saves Owen from bullies (who are all tweens or teens themselves) by tearing them into literal pieces, and Owen smiles.  When he and Abby run away together at the end of the film, the viewer knows with dread certainty that this once sensitive boy is doomed to Thomas's future of lies, deception, and murder.

This movie isn't scary, it is instead utterly horrific.  While I'm still not sure it is exactly Halloweeny as I usually define these things, it is the most unique and effective film I've seen for expressing the terror that is the vampire, and thus finds it's place on this list.