Well here we come to my last catch-up post.  This one will finally put me back on track for posting about Halloween movies all this month, so onward!  We started off in the first post with three of my favorite films to ring in the Halloween season.  In the second post we looked at some dark-ish fantasy films that also fit the Halloween bill.

Now it's time to consider a bit of creepy witchcraft by those who could be called "La Belle Dame sans Merci."  Featured in this trope is a outwardly beautiful woman who uses her charms to ensnare the innocent, with paranormal powers often part of her abilities.  It can be a tired, misogynistic trope if handled poorly.  But here are three films with this general theme that work well for me for Halloween.

Note again - SPOILERS all over the place. 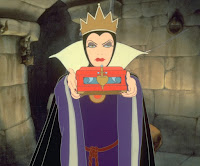 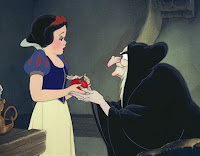 I thought about this one for a long time, wondering if I should put it on my list here.  I've always thought of this film as pretty dark fare, but wasn't sure others would consider it dark enough, what with all the chirping birds and such.  But I did want to include something that hearkened back to the "Grimm" fairy tales of the past, which are often so perfectly Halloweeny.  I also wanted to include a nod to both the great animation and compelling villains that Disney (at its best) can produce.  Snow White won out over other possibilities due to the sheer creepy nature of the Queen, and the vile things she does to ensure she will always be the fairest of them all. 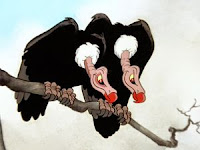 Consider first that the Queen is supposed to be the step-mother taking care of the young princess.  Instead the Queen is jealous of her and has her work as a slave in the castle.  The Queen is indeed so evil that when her mirror informs her that Snow White has become the fairest, she tells her royal huntsman to murder Snow White and have her heart brought back in a box as proof.  When she finds out that the huntsman actually let Snow White go, the Queen retreats to her dungeon, rifles through her spells, and finds a potion called the "Sleeping Death."  She laughs when she realizes this will mean Snow White will be buried alive.  The Queen is so scary even her pet raven is afraid.  This dungeon sequence is so perfectly Halloweeny, with the apple forming a deathly skull head as it is being infused with poison.

In true "Belle Dame" fashion, she lures Snow White into taking a bite of the apple by promising her all sorts of things, like wonderful apple pies and wishes that come true.  The dwarfs arrive too late for Snow White, of course, but do manage to chase the Queen into a frightening storm.  At the top of a cliff she tries to crush the dwarfs under a huge rock, but instead falls to her own death, with leering vultures circling down after her.

So yes, this movie is filled with lighthearted songs and frolicking animals and happy dwarfs.  But the Queen is really so malevolent that she steals the show.  This along with the wonderfully dark animated scenes in the dungeon and the storm make this a key Halloween favorite for me.

This is one of my most beloved Halloween movies.  With its foggy scenes, bent trees, flickering candles, magic, witches, and rampant unexplained head-choppings, it fits perfectly into the season.  So go watch it now so I can get on with my spoilers, here.  Righto.

Now that you've seen it you know why I have it in this "Belle Dame" category.  One might at first think this film is going to be centered on the headless horseman himself - that the horseman is the ultimate villain that needs to be defeated.  But it isn't so.  The undead Hessian is in fact merely the murder tool of the real villain. 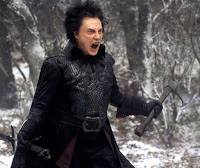 This movie is driven in part by ideas surrounding witchcraft.  We meet no less than four women practicing the art in some fashion.  As a scientist, Ichabod first rejects the ideas of supernatural powers.  But after confronting the horseman, and being lead to the cave of a powerful witch, he realizes such things do indeed exist.  He begins to recall lost, traumatic memories of his mother, whom he eventually remembers was killed by her own husband in gruesome fashion for practicing white magic.  When Ichabod finally figures out who is responsible for the murders, it is because he uses both his scientific skill and his growing understanding of the motives behind light and dark witchcraft.  And yes, it is the "Belle Dame" again.  A beautiful but vengeful woman bent on luring all her enemies, innocent and otherwise, to their doom.

Ichabod comes to terms with his painful childhood memories through his realization that witchcraft can be a good and gentle art, and that his mother was an innocent "child of the Earth."  And of course he wins the day by sending both the headless horseman and his murdering mistress back to hell.

Another stop-motion animated treat, I love this movie almost as much as Corpse Bride.  Coraline is a fantastic, original story with a bizarre plot.  At first it's a bit hard to follow.  What with all the colorful side characters, one doesn't really know where the eventual threat will come from.  But the movie gels nicely in the middle, as we meet the "other mother" who will happily provide for Coraline's every wish and need.  She has buttons for eyes, which is both very spooky and a dead giveaway that something isn't right, here. 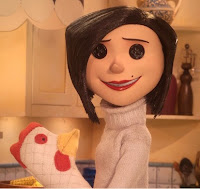 It does not seem very Halloweeny at first, just disturbing and strange.  But as  Coraline spends time with her "other family" she starts to feel more and more uneasy.  Then her "other mother" insists that if Coraline wants to stay in this little paradise, she has to sew buttons over her eyes.  She is even offered a box with two buttons, a needle, and thread, which just makes me cringe.  When Coraline balks at this horrific request, she is thrown into a closet where she meets the ghosts of three children who caved into the "beldame's" request, and subsequently had their life forces sucked dry by the creature.  Now we are definitely into good Halloween territory, as Coraline has to fight to save herself, the souls of the ghost children, and her trapped parents from this evil entity.  She gets some very Halloweeny help from a black cat, and through courage and wit, she eventually wins the day.

The film is appealing for so many reasons, not the least for the incredible color and lighting giving it a thoroughly creepy look and feel.  Coraline is a solid character, with enough childlike mannerisms to make her believable as a young person, but also with a good helping of brains and strength.  The story is unique.  And in the end, the "beldame" is so completely evil, wicked, and scary, that this can't help but be ideal Halloween viewing.