And on we go with another catch-up post about my Halloween movies of choice!  I've mentioned that my Halloween list is not pure horror or straight scares.  I like those, and a few are included later in my list, but mostly what I want is something that "feels Halloweeny."  Which of course is entirely subjective.

In this post we'll find movies that others would consider fantasy rather than anything like horror.  This is definitely true, but as for Halloween fun, they are high on my list, with monsters, skeletons, incantations, witches, curses, werewolves, and other dark delights.

As noted before, SPOILERS are to be found herein! 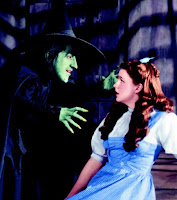 Most people think of this film as light fluff these days, but I just couldn't pass up this old classic.  The chills start with the nasty neighbor who shows up at the door with an order that allows her to actually seize a poor young girl's dog and take him away to be destroyed.  Then we are treated to a view of a tornado headed our way, and it looks way, way too realistic.  Once in Oz, we find feet sticking out from under the house, and an enraged and utterly iconic Wicked Witch of the West swearing revenge.

On the advice of another strange person, also calling herself a witch, the girl is sent off into the countryside alone to seek help.  She and her found pals walk terrified through a dark forest, and eventually end up in an audience with a menacing Wizard.  Wanting to get Dorothy to leave him alone for good, The Wizard (who is supposed to be a good guy in the end, ahem) sends the young girl off to her probable doom in a witch's castle.  Then the creepy flying monkeys kidnap Dorothy, who finds herself trapped in a room with an hourglass that is pouring out the last moments of her life.  It's pretty nasty, especially since you have no idea what's going to happen when time runs out.  The witch's eventual demise is rather grim, too.  So for all its happy dancing and singing bits, The Wizard of Oz is still my kind of Halloween fare. 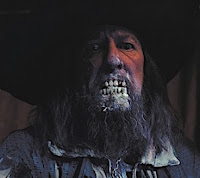 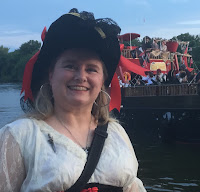 So I'll admit that a big part of the appeal with this film is having ridden the "Pirates of the Caribbean" park ride at Disney as a child.  It was both exciting and scary to get transported into the seamy world of the pirates - to see the skeletons that would never be found, and the buried treasure that would never be claimed.  The battle of the ships in the water was overwhelming in an age before special effects became commonplace.  The ending sequence where the pirates are imprisoned and the whole town seems to be burning down is thrilling and terrifying in turns.  It made an indelible mark on me, and from that time pirates were filed in the "Halloween" part of my brain, along with all the other creepy and scary stuff of that season.

Enter in the first of the "Pirates of the Caribbean" movie series many years later.  Although I find the franchise as a whole to be a little tedious, this film is still a fun and fearful romp.  As Halloweeny as pirates might be to me, this movie wouldn't make my list if it were just swashbucklers chasing one another over the high seas.  However, this movie features a most paranormal and evil curse plaguing one of the pirate crews, turning them into undead skeletons.  There is enough tension as well as excitement in the film to keep a pretty good pace, although the movie really is too long.  The female lead, while occasionally the brunt of typical treatment, gets to show some spine and courage of her own.  I'm not sure about Depp's quirky approach to his character, but overall it's a creepy ride through pirate infested waters.  Thus, the movie holds the pirate place on my Halloween movie list.

I wanted to include one of the Harry Potter films on my list, since I find them all to be pretty decent Halloween fare.  They have magic, mayhem, and monsters, of course.  And as the movies progress the constant dread about He Who Shall Not Be Named keeps getting more and more urgent.  All this is fine fodder for a Halloween flick.  I didn't want to just call out the whole series, that seemed lazy.  Instead I wanted to think of which of the movies seemed the most Halloweeny to me.  The Prisoner of Azkaban fills that slot, and I think it might be my favorite of the whole series. 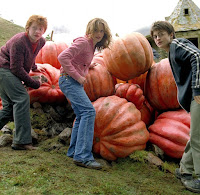 Some of the elements that make this more Halloween-appropriate to me include the fact that the main actors are older, but still kids.  They are old enough to increase the complexity of the story, but still young enough to help the audience recall the feeling of scary childhood adventures.  This movie includes a terrifying black hound, evil soul-sucking demons, a wild werewolf, a prognosticating teacher, a talking shrunken head, and the usual dark potion making.  Not to mention the grim execution of an innocent hippogriff.  There's also a nice big pile of pumpkins ...

Cold and brooding, the tone of the film is darker than the first two, with a growing sense of something wicked always brewing.  We find out that Ron's simple rat is instead a transformed traitor, who is responsible for the death of Harry's parents.  That really creeps me out, knowing that rat has been hanging out with Ron's family for years.  This is also the film where you really learn about how terribly nasty the Azkaban prison is, and start to gain more insight into how brutal and actually inhumane the world of magic can really be.  It's all fine Halloweeny stuff.

Image Credits:  Jack-o-lantern https://commons.wikimedia.org/wiki/File:Lit_Jack-o%27-lantern_glowing_menacingly.jpg via CC 2.0 Witch and Dorothy https://www.rottentomatoes.com/m/the_wizard_of_oz_1939/pictures/ Pirates photos, Mine and from https://commons.wikimedia.org/wiki/File:Lit_Jack-o%27-lantern_glowing_menacingly.jpg  Potter, mine and from https://www.rottentomatoes.com/m/harry_potter_and_the_prisoner_of_azkaban
Posted by JA Grier (ee/em/eir) at 5:56 PM